Sona Jobarteh is the picture of determination. That’s not just because of her consciousness, musicianship, poignant voice or effect produced by the bright-red dress she wore during her latest London gig at Rich Mix part of EDF London Jazz Festival; it’s something which is intrinsic to her figure.

From ‘Jarabi’ to the conclusive ‘Bannaya’, which also saw Sona’s son accompanying her at the djembe, the Gambian artist gave life to an emotional performance, which fully honoured her reputation of kora virtuoso and exquisite interpreter of the griot tradition.

Introduced by her remarkable musicians (who included Baaba Maal’s percussionist Mamadou Sarr, and Andi MacLean at the bass guitar), Sona transported the audience in her rhythmic world in the lapse of a few notes played on her kora. Then, during the following two-hour set, she recalled her first album Fasiya, published in 2011, but still preserving its heart-warming spirit, and prepared her fans to the forthcoming follow-up, which is going to be released early next year.

She engaged and captivated everyone, thanks to her chatty character and song descriptions, never ordinary topics and inclusive drive, which created a bond between the three-hundred strong audience and five musicians on stage. Even if Sona’s lyrics are in Gambian Mandinka, the crowd supported her, intoning every refrain, imitating the sound of the words they listened to, waving and clapping their hands and dancing to the West African beats.

Sona, for her part, fully exposed her musical path that started with her griot origins, continued with her London studies and now passing through her Gambian present. Her artistry and tunes are a clear reflection of the three souls cohabiting in her. She sings indeed themes inspired by her everyday life, like the constant struggle of women for better life conditions (‘Musow’), or the importance of grandfather figures and lessons they teach (‘Mamaké’). But her songwriting is well anchored to her roots, which recall a centuries-old tradition. Finally, she makes extensive use of Western oriented arrangements that allow her to easily engage her non-African audience.

In a few months time, Sona will be back to Europe with a new album and tour, and you’ll have another opportunity to enjoy the music of a one-of-a-kind artist. Preview of the album:   This Album is no longer available however if you want to receive exclusive access to a free album like this each month just sign up to our monthly newsletter by filling in the form below:     Track List: 1. Ballaké Sissoko feat. Sona Jobarteh – Djourou [from… 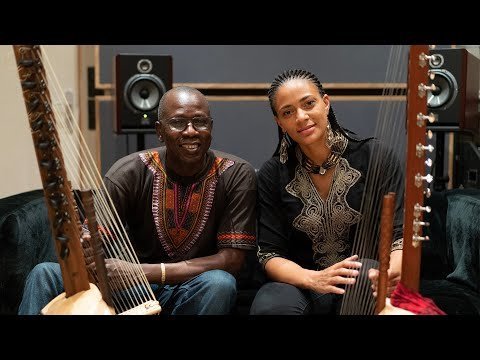 Malian kora player and composer Ballaké Sissoko and Gambian multi-instrumentalist and composer Sona Jobarteh recently gave life to an inspiring collaboration resulting in their new single and video ‘Djourou‘.   “Ballaké sought out Sona for a collaboration with a specific wish to connect with the younger generation of kora…