Damir Imamović’s latest album Dvojka with his band Sevdah Takht and published by Glitterbeat Records, clearly proves that some musical traditions can never be suppressed. Having grown up during the siege of his home city, Sarajevo, and coming from a long line of sevdah musicians, Damir Imamović is in a unique position both to reflect upon his musical roots and to guide the genre of sevdah in a new direction.

Sevdah, with its themes of longing and loss is, in some ways, similar to the possibly more familiar Portuguese fado. This fascinating and contemplative vocal tradition underpins life in Balkan Europe, though it is not so well known further afield. We were fortunate to be able to talk to Damir and get some insights into the music. We began by asking him to explain a little about sevdah’s roots.

“Sevdah is a genre which emerged slowly as a product of meetings of the East and West in the Balkans. Different styles of art emerged out of these meetings in the region. The Bosnian version is usually referred to as ‘sevdah’ or ‘sevdalinka,’ but some parts of Montenegro, Serbia and Macedonia also inherit the same tradition.”

And what does the word sevdah actually mean? We hear it’s connected to the word ‘saudade’ that is associated with Portuguese fado singing. Is that true?

“The very word ‘sevdah’ means ‘love’ in Turkish. It also has a long history in ancient studies of medicine where ‘sevda’ was a word for black bile, a substance said to be responsible for melancholic moods. ‘Sevdalinka’ is the name of the song that carries the feeling of sevdah.”

Yes, that feeling of longing, melancholy and nostalgia is common to both sevdah and fado. So what aspect of longing are the songs about?

“Love and everything that goes with it! Especially love that was forbidden or shut down in one way or another. This genre came into being in times of strong religious and patriarchal social order, when individuals usually didn’t have a say in their own choice of partners.”

You sing sevdah, and your grandfather was also an exponent of this style. But is it not the case that sevdah was predominantly women’s music?

“Any lyrical form is traditionally connected to a female sphere. They were the ones who were not allowed to freely exhibit themselves in public. But feelings are feelings, male and female alike. That is why, once expressed, they become everybody’s heritage.”

Tell us a bit about your family background. We just mentioned your grandfather, Zaim Imamović, who was a well-known singer. Do you think it is because of this family link that you feel connected to sevdah?

“Zaim was one of the revolutionaries of sevdah around the Second World War. His sister Đula was also a very important sevdah singer before the war. My father Nedžad Imamović, Zaim’s son, is an important singer, author, producer and bass player. So not only Zaim, but other members of my family were heavily involved with sevdah. I was always aware of it. It was around in the house, at family gatherings. Somehow I just discovered as I was growing up that I knew all these songs and am able to sing it. It all must have influenced me in a way, without me even knowing it.”

Besides sevdah, there are many influences in your music. Tell us a bit about your musical education and how you came to take up music as a profession.

“I’ve never studied music. I graduated in philosophy and took up music totally on my own. My older brother and my father showed me some chords, and I learned together with my friends. I think that only in the last ten years I started thinking about it seriously as a profession, and began applying some of the things I learned a long time ago. I wasn’t even aware I knew them! I loved blues and jazz, rock ’n’ roll. Everyone loved Eric Clapton (The Cream and Blind Faith), Deep Purple, Led Zepellin, John McLaughlin, Carlos Santana, Howlin Wolf and many others. Later on I got hooked on Miles Davis, Ravi Shankar, and much later on Tunisian oud player Anouar Brahem. The diversity of influences is the most precious thing I feel ever happened to me. I still have in my phone all the different kinds of jazz, Indian classical, different kinds of sevdah, pop, blues, Turkish music, etc. Bringing the cacophony to a coherent statement was always my strong side. That is one of those things I never really had to work on – at least not consciously!”

Yes, thanks for introducing us to Anouar Brahem. His music is beautiful! To get back to your early years, like all youngsters you practiced shut away, trying things out on the guitar. But in your case it was quite unusual because you were in a basement in the besieged city of Sarajevo for almost four years during the 1990s. Do you think that had an effect on your practice?

“It must have done. I clearly remember the moment when music became my profession and I had to start practicing every day, not just when I wanted to release a bad vibe. It took me a while to incorporate it all in my routine.”

Your teachers also were from the tradition. Where did you meet them?

“My earliest sevdah teacher was Spaso Berak, an arranger for Himzo Polovina. I knew him through my father and I played in an orchestra he lead as a part of larger folk dances group. I met the saz legend Hašim Muharemović in Sarajevo. I was running a project on sevdah at the Art Gallery of Bosnia and Herzegovina and invited him to give a concert there. Emina Zečaj I met after she praised my work in the press, so I phoned her and started visiting her.”

One of your previous recordings came about through some summertime solo concerts you did in a garden in Sarajevo. The music has a lovely spacious and timeless feel to it. Tell us a bit about that.

“I did two solo albums for voice and guitar only [‘Damir Imamović’, Gramafon 2010 and ‘The House of Svrzo’ ITM, 2011]. The second one was from the concerts in ‘The House of Svrzo’ in Sarajevo, an old and legendary place that belonged to the old Svrzo family of merchants. The mix was done by the famous Norwegian sound engineer Jan Eric Kongshaug from Oslo. He mixed a lot of ECM productions such as Jan Garbarek, Keith Jarret and Anouar Brahem.”

Yes, the production style of Jan Eric Kongshaug is quite distinctive on that recording, and more generally your sound is quite different to that of older recordings of sevdah music. We’ve listened to your grandfather Zaim Imamović’s interpretations from the mid 20th Century, and compared with yours they sound more ‘European’ in flavour. Are you emphasising different elements of sevdah than he did? Is there a change in aesthetic ‘fashion’, or is it something deeper?

“What Zaim and his generation did was partly controlled by the official radio aesthetics of the time. Zaim and similar important singers were able to express the Eastern-like melodic ideas in the Western context. That is one of the reasons they were so successful. What I am trying to do is build upon that and go even further in this communication between the worlds. I feel Bosnia and its culture are still in an ideal position to be this cultural bridge. I think any art form needs to develop further and question its tradition. Mere repetition of the old is not only a sacrilege to the idea of tradition as a school, but is simply impossible! You always bring something new to it, and that process is very delicate and full of potential dangers. That is why we have to be aware of it and take as much control over it as possible.”

Let’s talk about the lyrics now. Many of the songs sound like they could be centuries old, but others are new. There seem to be lots of metaphors. Can you tell us a bit about how you write contemporary lyrics in the style?

“Sevdah lyrics are based on centuries old idioms of South Slavic oral poetry. It is in the Bosnian/Serbian/Croatian language, and its poetic heights have been famous amongst researchers since the end of 18th century. Writing in that style with a contemporary twist asks for a solid knowledge of this tradition, and a lot of time spent performing and researching this genre. I wrote my first sevdah melody as early as 2007, but poetry took me almost ten years!” 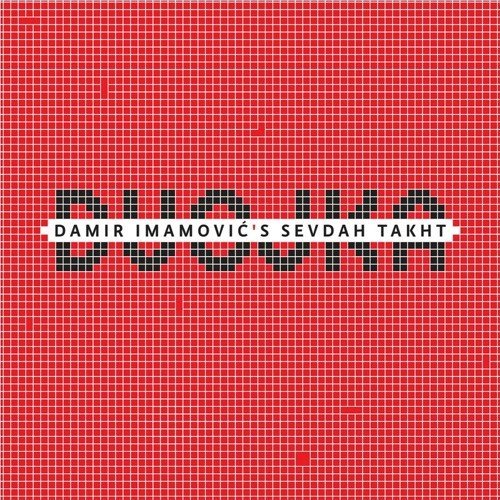 Damir Imamovic’s Sevdah Takht continue with their stated mission to pursue innovations in modern sevdah music, on their second album Dvojka released at the end of this month. Fronted by Sarajevo born Imamovic, this pan-Balkan band with members from Bosnia and Herzegovina, Croatia and Serbia bring a range of musical…