If baile funk has invaded Europe and become a thing on the Old Continent too, you need to look at and listen to these two Rio de Janeiro born and São Paulo based DJs and producers. Six years ago, Gustavo Gomes and Pedro Fontes, known together as Marginal Men, started to play, mix and create music in Rio. They eventually moved to São Paulo and found a way to blend their passion for UK bass sounds with their Brazilian electro-dance roots. Today, they are ready to release their first EP on influential Portuguese label Enchufada, but their résumé can already show off some important collaborations and remixes, like their latest project with Viní, “777”.

We reached the duo via phone a few weeks ago, when they were in Lisbon visiting their label HQ and about to play a gig at Park, in the Portuguese capital.

At the start of our conversation, we returned to 2011 when, as Gustavo confirmed, the Marginal Men story was set on motion:

“At that time, I was doing the Wobble parties in Rio de Janeiro and Pedro started to work with me in that period. We really got along well together, so we decided to start a project together. When we moved to São Paulo, I remember that there used to be those parties called Tranquera, where people used to organise mixtape contexts. So we decided to participate in one of them and reached the final, eventually losing to Vinzzz. and Amanda Mussi.”

Pedro added that, “Before that occasion, we were just playing back to back with no name. But from that moment, we started to call ourselves Marginal Men.”

Gustavo explained to us that their name is very distant from traditional baile funk imagery:

“There was a hardcore band from Washington in the 1980s, which was called Marginal Man. They were quite popular in the scene and we have always liked their music. Also, I used to play in a hardcore band years ago. For this reason, one day when were looking for a name, I saw Marginal Man, so we decided to change the ‘A’ with an ‘E’… that’s the secret of our name.”

Next to the hardcore band, there’s also a sociological theory defined as ‘The Marginal Man.’ It exemplifies the troubles which an individual suspended between two cultural realities has to experience when determining his own identity. We asked Pedro if there was a relation between their name and the theory too…

“That’s another reason why we got along so well with this name: because of the marginal man theory. We are both from Rio, but we don’t live there anymore, because we actually live in São Paulo. So we don’t belong to the city where were born anymore. At the same time, when we started to perform together, we wanted to play something that wasn’t directly related with Rio or São Paulo.” 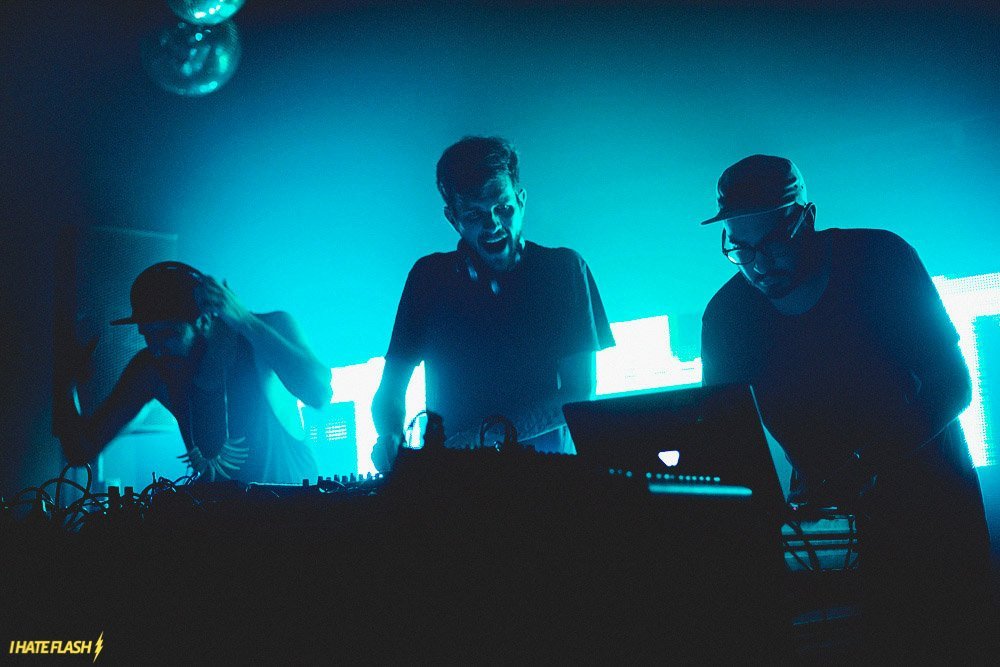 To complicate things, there’s also the fact that Marginal Men are deeply related with Lisbon and its music scene:

As Gustavo confessed: “It’s only the second time we come to Lisbon, but we simply love the city. The first time we were here with Branko [member of Buraka Som Sistema and co-founder of Enchufada] to record a session, while this time we’re visiting Enchufada and doing some gigs. But we’ve already fallen in love with the city and its music.”

Pedro agreed: “We really like the music which is played here. We love the mix. We can enjoy both its African and European influences. For us, the music played here is quite natural and it’s also influencing our own style.”

Gustavo continued: “We were already influenced by the Lisbon scene even before coming here. On our mashup album, two tracks are composed by two Portuguese producers. Then we are doing a lot of stuff here in Lisbon and also work with Branko, who has helped us a lot. The music produced by Enchufada was really important for us in Brazil and our label is based here too…”

We seized the moment and asked them what was the spark which moved them to sign for Enchufada.

Pedro explained: “We were playing for Enchufada long before we met Branko in Brazil. You need to know that Enchufada is a really important label for us and our crew. It’s not well known in Brazil, but if you’re into our scene you’ll surely know it. As a matter of fact, the whole Brazilian dance scene is now looking at Portugal. Many DJs and producers are looking at Portugal and we consider Enchufada as a model.”

Gustavo highlighted the relation between Portuguese and Brazilian music: “We have been noticing that in the last months, after Branko came twice to Brazil, many DJs are starting to show Portuguese influences in their music.”

On the other hand, we also wondered how the Sao Paulo electronic and dance scene is doing…

Gustavo said: “Electronic music in Sao Paulo is really vital and acknowledged all over the the country too. We have a lot of labels and parties happening there, for this reason the city has become really important, also for foreign DJs. When they have to play in Brazil, they choose to come to Sao Paulo. So yes, the scene is really vibrant.” 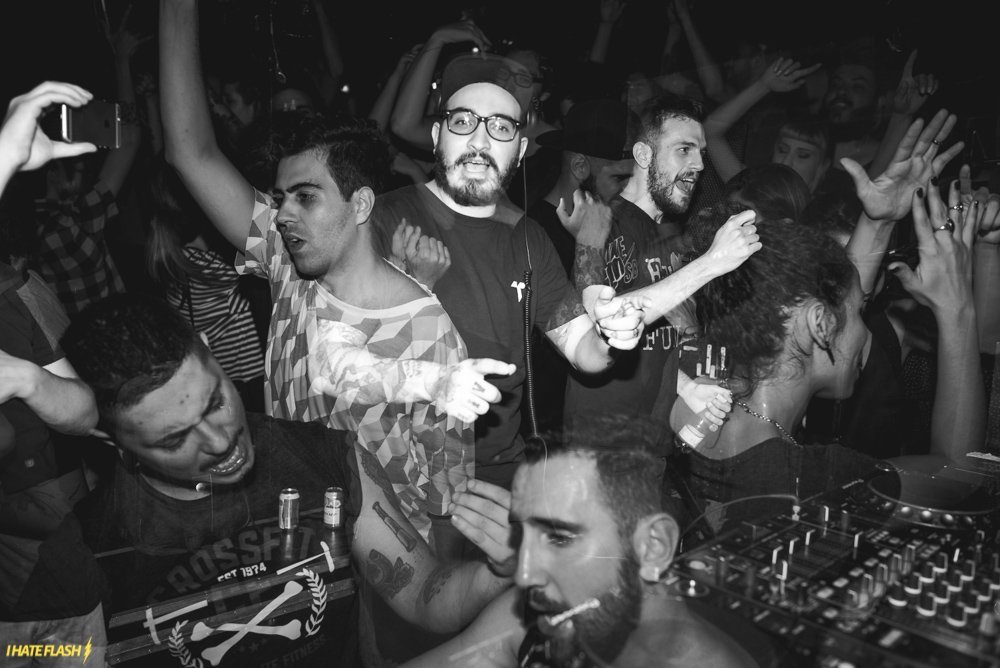 Pedro wanted to make a further comment: “The big thing happening now in São Paulo is baile funk. Even if the scene becomes popular in Rio, baile funk has always been in São Paulo too, in Santos in particular. It has been there for a while, but it never worked before. Finally, three years ago it really exploded in São Paulo too. So there’s a whole new scene there, with dozens of new producers. We saw that starting off and followed it.”

We asked Gustavo and Pedro to suggest some new names and reveal what they are listening at the moment.

Pedro began by saying: “On the bass side you have to check Beatwise. There’s a bunch of producers involved and they have their own label. They’re going to release an album in the next few months and have formed a great collective also because they’re all good friends. They’ve been really pushing the beat scene in São Paulo and are expanding it a lot. The main guys to look at are Sants and cesrv.”

Gustavo added: “Then, there’re producers who are mixing baile funk with bass. One of the main guys is Viní. He’s really good and has also released some stuff with Enchufada. In Rio there’s a crew called Bruk. They are another group of producers who play bass and baile funk, but they also add a little bit of soul. Finally, there’re two guys called Carlos and Bad$ista who are also really, really good”.

However, despite the richness of music played in Brazil, the scene is not supported by government or politicians. Gustavo revealed to us that, “The situation is not really good. For example, in São Paulo there’s only one festival left, which occurs once a year and is called Virada Cultural. That’s the only thing they organise today! We used to have plenty of those street parties, which were really big events, attracting famous DJs too. But, recently the State shut them all down. I think that the main reason is because of the election. Since it’s the election year, they want everything clean and tidy.”

Luckily, there are projects like Marginal Men who are trying to update the Brazilian sound and take it in new directions. The duo has recently collaborated with one of the producers mentioned and together they have released a single. For this reason, we asked them, how their partnership with Viní came about…

“We started to think about a project together as an instrumental beat. We took as example an MC from Rio called MC TH, who’s having the best time of his career at the moment. The producer who makes the music for him has this different style, because he uses melodies and guitar. So we tried to think something like that, but in the end it followed another path and came out in a totally different way.”

With an EP in the pipeline, due for release in September, Pedro told us that Marginal Men are now focusing on their live shows and summer European tour:

“At the moment we’re touring Europe, playing different festivals here in Portugal, then in Poland in August. But we are also looking forward to organising more gigs. For example we’ll be visiting London during the second part of August and planning to find some dates there.”

It goes without saying that if you want to catch the latest development of baile funk and understand how it can interact with the European electro scenes, you don’t have to miss this duo. Though divided between their Sao Paulo residency and Rio de Janeiro, they also enjoy brief jaunts to Lisbon and London. This mixtape was inspired by the rising global trend of organizing forró balls, first in the Southeast of Brazil (São Paulo/Rio), then in the US and Europe. Not exactly the kind of forró I discovered in Pernambuco, at Chimchim da Baiana (Olinda) and such places. Another kind of forró and…