As a matter of fact, “exoticism sells”, so on paper, it might be very hard for a Pakistani band to reach the Western audience featuring spiritual jazz, hip-hop and electronica in their offering.

But that’s not the case for Jaubi, a project launched back in 2013 by four Lahore-based musicians coming from different musical backgrounds and formed in a wide range of styles.

Given the musicians’ cultural roots, education and taste, Jaubi grew into a fascinating sonic blend between the South Asian tradition and Western influences. Listening to their debut album, titled Nafs at Peace and released on the 28th of May by Polish label Astigmatic Records, you are almost overwhelmed by its richness and intensity.

The LP moves between J Dilla and qawwali, West Coast hip-hop and Ravi Shankar, Coltrane and Hindustani classical music, and it does that with so much confidence and credibility that you end up wanting more and wanting to learn more about its “architects”.

That happened to us as well, so we contacted Ali Riaz Baqar, leader and guitar player of the band, and asked him to guide us in a journey through the depths of Jaubi’s soul.

Nafs at Peace, which will be released tomorrow, is your first full-length album. How do you feel about it and what are your highlights of the work?

It’s a great feeling that it has been released because sonically it is a new direction for the band. The highlight was the lovely and collaborative journey with so many different people.

Nafs at Peace is an album with a strong spiritual drive. Looking at its title and cover, it’s pretty clear that there’s something which goes beyond music. What was its starting point and how did you employ music to express a profound concept like the nafs or self?

During those recording sessions, I was deeply into Eastern philosophies and Islamic psychology so that’s how the actual concept of “Nafs” came about. I found it whilst reading and trying to rediscover myself after going through a difficult period in my life.

The album was recorded predominantly in April 2019 in Lahore, Pakistan, however the album concept and certain song titles actually came much later, around January 2020 which is when the tracks were being mastered. When I listened to the masters, I tried to remember what I was feeling.

Nafs itself is an Arabic word meaning “Self” and in the Holy Qur’an, three levels/types of Nafs are described. Our album title, Nafs At Peace is inspired by a specific verse in the holy book and refers to the last purification step the self has been through. At this level, the Self no longer struggles because one has replaced negative and destructive behaviour with complete love of God. The heart becomes content in that which God is happy and pleased with. Hence, Nafs At Peace is an exploration about finding peace within oneself by becoming at peace and tranquil with God’s will.

Some people connect with God through prayers and scriptures. We connected with God through musical notes and sincerity. We had no idea what the music would sound like however everyone was sincere to the music, leaving egos behind. The spiritual vibe was manifested through hearing the Adhan (Muslim call to prayer) when we took breaks on the rooftop of the Lahore studio or by lighting incense sticks in the studio.  Therefore, the combination of the spiritual recording environment mixed with sincere musicians were crucial to exploring our Nafs.

The album’s journey started two years ago and went through a (still ongoing) global pandemic. How much has it affected the project and how was it to work with musicians based in different parts of the world in this mad period?

The pandemic had no impact on the recording, mixing or mastering of this album, however it did impact on the release date. Since 2019 we have unfortunately not collaborated with other artists yet because of Covid and travel restrictions.

One of the strong points of the album is indeed the fact that it’s the result of collaboration between musicians and music professionals from different backgrounds and countries (not only Pakistan, but also the UK, Poland, Canada, the US and Norway). Despite it can be considered, in some ways, a collective work, can you identify who added what to the final outcome?

This album would not have been possible without the genuine support from the record labels (Astigmatic, 22a) and the musicians (Tenderlonious, Latarnik).

Each song was composed in a particular scale or based around a raga to convey a certain mood or emotion. The first step of the creative process was, usually the night before I would create a melody within the selected raga or scale and then present the melody to everyone else in the recording studio the next day. The rhythm section would come up with a groove and then we would figure out the order of soloing. After that we would hit ‘record’ and figure out where the song would take us. It was a collective process.

How much and in which way has working with musicians like Tenderlounius and Latarnik and labels like Astigmatic Records and 22A for more than two years influenced the way you compose and play music?

Collaborating with them has not influenced the way I compose per se as I have very specific theoretical concepts I work on. However the collaboration did demonstrate the importance of being open minded. When you are playing with musicians of the calibre like Tenderlonious and Latarnik, your own playing improves. Their level of musicianship is extremely advanced and their approach to our music came from a place of sincerity. They had no egos and only cared about the music. Collaborating with The Vox Human Oslo chamber choir was a similarly enjoyable experience.

Since your debut, which dates back to 2013, you always looked at a wide range of styles and traditions to shape your sound. We can easily recall North Indian classical music and Hindustani ones, hip-hop, electronica, spiritual jazz and so on and forth. Which are all genres and styles that smoothly harmonise with each other. Still, how do the creative and musical blending processes work for Jaubi?

North Indian classical music (NICM) is a sacred art form and within Jaubi we simply use the key elements of NICM to convey our emotion. This would be analogous to a hip hop producer sampling a nice loop of a song and flipping/interpreting the chosen sample to present something different. Accordingly, we try to “sample” good parts of all genres (NICM being one of them), to convey our emotions. Melody and rhythm are central to all genres of music (e.g. hip-hop, jazz, etc) and the wide choice within both the melodic frameworks (ragas) and rhythmic world (taalas) allows us to “sample” these elements and present them in our compositions.

While if we have to name names, it’s straightforward to mention J Dilla, Coltrane, Yusef Lateef as some of your main inspirations. Who else would you add to the list and who else did you listen to when writing and working on the new album?

It’s a shame, but we hardly cover music or musicians from Pakistan apart from traditional ones. Do you think there’s any particular reason why Pakistani music rarely reaches a broader audience outside the country and when it does, it’s usually about traditional sounds?

The traditional sound (e.g. Qawwali, folk music, etc) is considered exotic for western audiences and that’s why it makes it outside of Pakistan. The exoticism sells. The underground scene however is very much alive and represents a more contemporary sound. The underground scene includes artists merging R&B, hip-hop, folk, heavy metal.

The other issue is that almost all the underground artists are independent and self-funded. There is minimal financial support for artists and if money is provided then it usually comes from commercial companies which partially control the artistic output.

I recently read a few articles stating that Lahore’s music scene is finally growing, with more young acts and a more diversified panorama. How do you feel about it and are there any Lahore-based musicians/bands you’d like to suggest we listen to?

It makes me so happy to see the underground scene in Pakistan slowly getting mainstream traction. It is a real community vibe. There are so many Pakistani artists I would recommend such as Natasha Noorani, Slowspin, Ali Suhail, Maanu, Red Blood Cat, VIP, Poor Rich Boy, Towers TV, Takatak. There are many more!

As said, your album was released a few days ago, so what’s next for Jaubi? Do you already have any other plans for the future and when are we going to enjoy your music live in London or the UK?

22a are trying to bring us to the UK to perform, however Covid is likely to cause delays. In the interim, I am preparing material for our next album which would be more planned and worked out compared to Nafs at Peace. Inshallah, we can have the opportunity to collaborate with other artists and contribute to other people’s projects. I would love to explore choral and chamber music and somehow incorporate Gregorian chants.

We always close our interviews with a tricky question… In a few words, how would you describe your music to someone who has never listened to it? Nightshop show for October via Radio Campus Bxl, Rhythm Passport & Groovalizacion Radio with +3 hours of new global albums & sounds. 3 songs of the day via India, La Reunion and Berlin. Our albums of the month take us to Egypt (Juju Sounds) via Zimbabwe mbira sounds (Awesome Tapes… 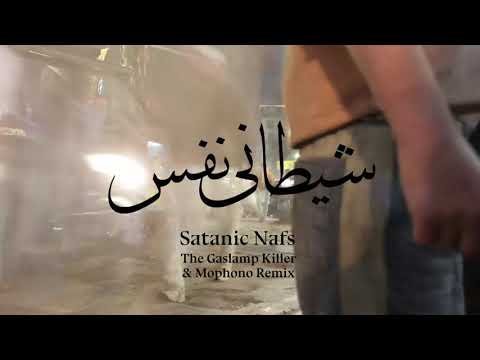 Jaubi (“an urdu word roughly translating to whatever”) is a quartet from Lahore, Pakistan blending North Indian classical music with modal jazz and hip-hop. Satanic Nafs is their new single on Astigmatic Records and serves as a “teaser for Jaubi’s debut album entitled ‘Nafs At Peace’ which itself is a musical…