Since 2016, when we first met them at WOMAD UK, we have constantly felt under the rocky spell of Kel Assouf. The roughness of their sound, which goes side-by-side with their heartfelt and profound lyrics, has brought new life into the so-called Tuareg rock style.

Despite being based in Brussels and intrinsic to the Belgian capital music scene, Kel Assouf echo the desert. Their music is an image of the Nigerian Sahara, where Anana Harouna (bandleader, singer and guitarist) comes from.

A few days ago, and a few days before the release of Black Tenere (Kel Assouf’s new album out on Glitterbeat Records on Friday) and the beginning of their UK tour, we reached Anana for a few questions about the past, present and future of the project.

Let’s start with the good news… Black Tenere, your third album, will be out in a few days’ time. Can you tell us the story of the project? When did you start writing its songs and how did the process develop?

In 2017, we were thinking about a new album while our five-piece band was still touring. For various reasons, with Sofyann Ben Youssef, we felt we needed to go further with the rock direction we had taken with Tikounen. Specifically, we felt we needed more freedom. During the summer of 2017, we had a sudden inspiration: we would go for a trio formula that would allow much more spontaneous playing and improvisation in the live set. By having one musician (Ben Youssef) for a double function (bass and chords, rhythmical organ) we have a super efficient duo with the drummer. Together they can make instant decisions and support my guitar playing. I feel very free now, because I know they will adapt in any circumstances.

I write new songs all the time. So, when we had found this exciting new formula, we could simply start some demo sessions and jamming around more or less 20 songs and see which ones we would develop for this album.

Is there a particular theme or inspiration behind the album?

My personal history is the centre of my works. I am here in Brussels, and at the same time, I am very connected to my fellow Tamashek people. I feel very much the sense of injustice. I want to fight against this neo-colonialism that comes with the big companies supported by their states. As it happened during the colony, we have very few people and states that exploit a mass of people again and again. It is an unequal fight.

Black Tenere sounds like a pretty meaningful title, almost an oxymoron. Can you explain it?

Tenere means desert. Black can be seen as dark, and as a reference to oil as well, as the cover picture of the album represents in a symbolic way.

Kel Assouf started paying together back in 2006. How much has your sound changed since then? Is there any particular music direction that you are following?

The first album was very close to Africa with the participation of various artists who brought their sound. The meeting with Sofyann Ben Youssef is important, because this guy has very clear visions of the new directions we can explore. Tikounen was a first experience. Maybe thanks to his experiences with Bargou 08 and then AMMAR 808, he has developed a tasteful way of combining very authentic traditions and modernity.

Black Tenere is an evolution to me, because we made it happen very freely, with many live vibrations in the recording. On my side, I have been influenced from the beginning by the sound of rock bands like Led Zeppelin and Black Sabbath. Jimi Hendrix is very important too. And then, of course, there is something in my DNA that comes from the melodies and scales and rhythms of the desert.

Back in 2016, when we met at Womad, and when you released your previous album, you were hitting hard about issues like European migration policies, intolerance and violence (in particular in the Sahara region). I guess that, considering today’s scenario and the fact that things only got worse, you might be angrier or more disillusioned than ever. Do you feel there’s a way out from this or a solution to this situation?

There is only one way: we need to stick to what we do and say it again and again: if there is no justice, there is no peace.

How and how much can music help to make things better?

Music has proven its capacity to gather people. That’s a long story. Musicians can play this role of telling things. The more music, the more chances for things to change.

What’s your relationship with Niger and your roots today, and how much is your “Belgian life” influencing them?

We live in a global world. One can get access to many different cultural products, and I am happy to live in this multicultural city of Brussels, having this young talented Flemish drummer, Olivier Penu, who is half Romanian, with me. He worked very hard to learn the Tamashek rhythmic patterns. And then Sofyann, who comes from Tunisia. Isn’t that wonderful? Living in Brussels in a dialog with so many different people also helps to open windows without fear, letting the Niger traditions evolve into something new.

The so-called “Tuareg rock” is livelier than ever, maybe less popular than 5 or 10 years ago, but there are still plenty of good young bands coming out every year. In some ways, it’s also becoming louder, with a more rocky and distorted sound. Do you think there’s a reason behind this new direction? Who are the musicians who are bringing the style forward?

The rock sound is definitely connected with anger and the need to say it loud. This world has to evolve into something really different. Among the very new bands, I only see Imarhan, and I like them!

While talking about your current residence… how do you feel about the music scene in Brussels? Is there any musician/band we should listen to?

There is a very interesting alternative scene; many underground venues with strange innovative music. About bands; why not dig Black Flower, Phoenician Drive?

It looks like you are going to have some pretty busy months ahead… What’s next for Kel Assouf?

A very nice tour in UK of course! Seven concerts, including The Lexington in London. And then, yes, follow our Facebook page and website, because the calendar is getting quite busy.

Did you watch “Fransa”? You know we want to stick to a strong political message. Maybe you will feel it in the clip.

As said, in a few days time you’ll be playing quite a few shows in the UK. What should people expect from your gigs?

They can expect deep melodies and strong rhythms. They will feel our freedom and be part of it. They will dance until they fall, and they may cry at some moments as well.

We always close our interviews with a tricky question… How would you introduce Kel Assouf and your music to someone who has never listened to it?

And the spirit of rock’n’roll and the spirit of the desert will be rocking the UK stages starting on Friday in Bristol at The Full Moon and going ahead until the 23rd, with the final leg of Kel Assouf’s UK Tour at The Lexington in London. 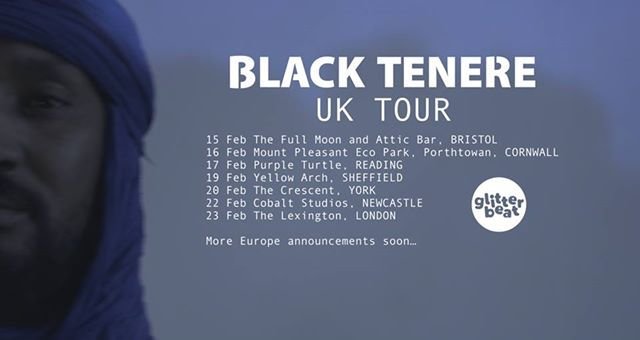 For once, we will move far away from our London comfort zone to explore the Sahara desert. Our next live streaming session, organised in partnership with our friends at Hit The Road Music Studio (and streamed on both pages), will travel on a Trans-Saharan route to bring you sounds from… We’re backstage at WOMAD 2016 drinking mint tea with Kel Assouf, a group of musicians who describe themselves as playing ‘Stoner Rock’ from the desert. But this is not the Californian desert of Palm Desert Rock acts like Queens of the Stone Age- we’re talking about the Sahara desert. The…