Interview: Steam Down – ‘A Spirit Beyond Everyone’ (October 2018)

The hype machine is running at full speed and the infamous term (I’m sorry…) ‘UK Jazz’ is the hot topic from the global music press right now.  A number of London based musicians are grabbing the moment with both hands, scoping out the distance and growing their own club nights. Making it both accessible and relatable to young Londoners, they are biting the ears of the masses and connecting with a more diverse group of listeners.  The jazzy sound is now shape-shifting between genres and is moulded with touches of grime, hip-hop, Caribbean, African and soul music.

Steam Down is one of the groups waving their flag to the sound of the march. They are a collective of evolving and talented musicians, poets and artists that work together as a multidisciplinary arts group.  They come together as a band but also share and contribute to each other’s personal projects. Steam down seem to have tapped into a truth-finding protest, as they help fight against mindless consumption and pull you right into the present.

At the heart of this party is improvised creativity with a strong intent to encourage collaboration and interaction; a dialogue between player, dancer, listener, thinker and artist. We caught up with founder and musician Ahnansé alongside other Steam Down family members in Buster Mantis, Deptford, their current home, sitting around a sticky wooden table we were joined by a diversity of poets, singers, producers and artists (Alex Rita, And Is Phi, Brother Portrait, Dominic Canning, Nache aka Edward Wakili Hick, Nadeem Din-Gabisi, Sawa-Manga and D’Vo).  Talking against the rumbling of trains atop the brick arches, we chatted about what this project means to them.

Given the unique multidisciplinary nature of your group and the size of it, how would you describe Steam Down?

“I don’t know if there’s a word right now to be used for what Steam Down is. I don’t even know if ‘collective; is an appropriate word to use.  Maybe a movement?

[One of the musicians quick-wittedly shouts ‘EMPIRE’ as they burst into giggles.]

“Ultimately it’s a group of co-creators building together.  One aspect of it is local community.  Another aspect of that is the art ensemble. These people here, and a few others that are not here, are working together on shared music for Steam Down. But the idea is also to be an umbrella where all sorts of people can come together and share resources and therefore we can provide people who love to play together with the space to play together.

“It also acts as a springboard for everyone’s individual voices as well and not just the collective voice.”

Your dedication to collaboration has given you a more powerful platform from which everyone helps to lift each other.  Is this community ethos as important, if not more so, than the resulting art you create?

“There is a strength in the collective but there is also the challenge of learning– a devotion to learning. Steam Down is alive. It has a spirit that is beyond everyone. We are aware of that and have to be in communication with that as much as each other.

“I guess it’s taking this form now and it’s growing into something where we can see more potential and purpose. It originated from that space where friends can come together and play music in a free unrestricted way.  We couldn’t do that as much as we became more professional. Even though it’s growing that way again, this space is still about complete freedom.

“When Ahnansé first started this there were fifteen to twenty people and now there are many more, but when we are on stage, we still try and just do what we did then. It’s not easy but I feel like we manage to harness that a lot more.”

You feel like a family held firm with strong bonds.  Are these new friendships or have you known each other for a long time?

“Most of us knew each other for a long time or knew of each other. Some of these relationships go back years, more than half a decade.  The relationships aren’t new.  The Steam Down weekly provided the space for us all to connect but the underlying connections were there already.”

How have you seen each other grow over that time?

“Well, Ahnansé has become a full-bodied conductor. He’s standing on the kick drum and jumping into the crowd. Ahnansé has transformed the most in

[One of the group cries out, “You’ve changed Ahnansé, man”.]

“In all seriousness, we haven’t seen anyone change, just grow. Just shine brighter.

“Ahnansé has this amazing way of making everyone feel really comfortable; you feel like you can be yourself and make mistakes and that’s ok. When you are leading something and you have an understanding of feelings and emotions, that’s so important.” 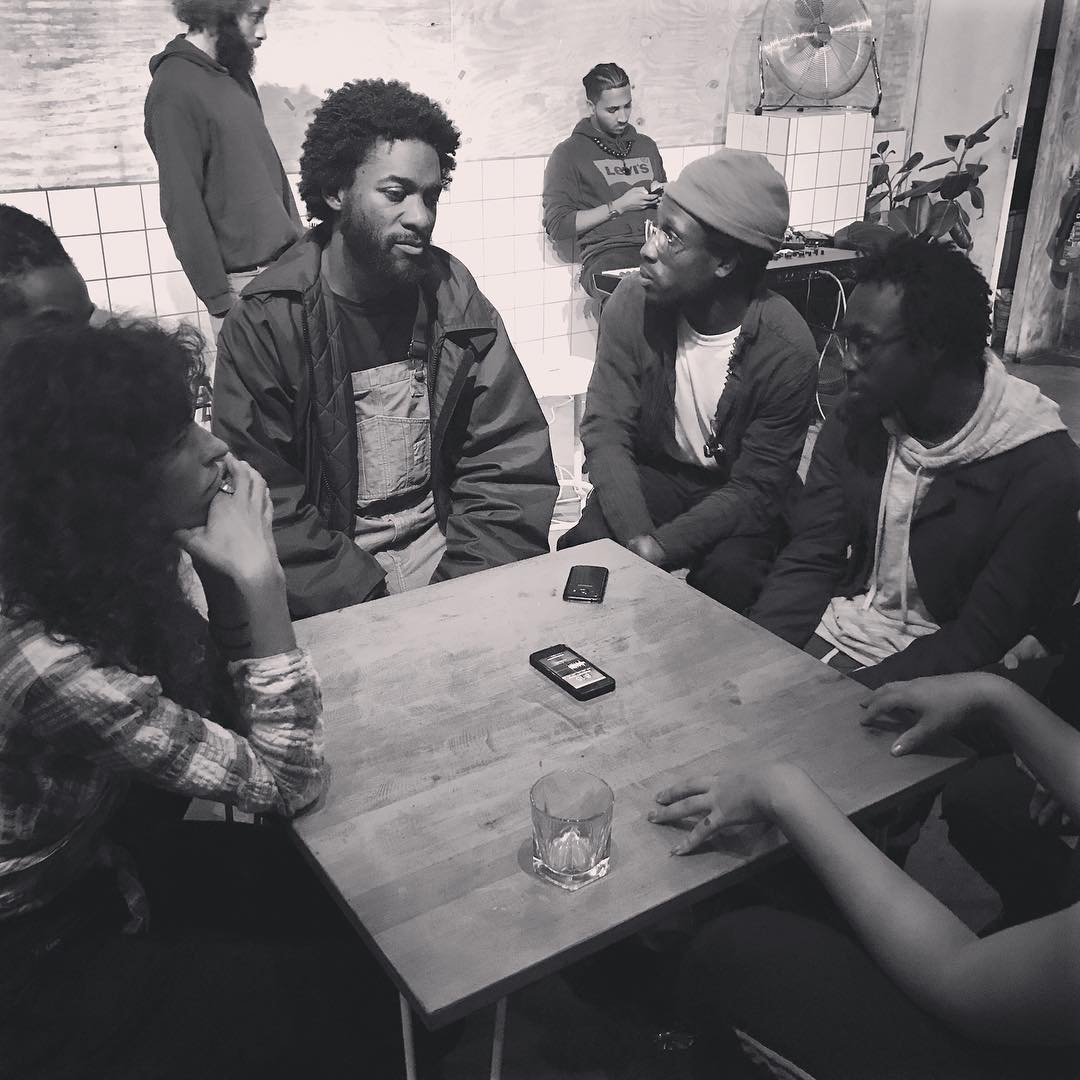 One of the most touching observations from watching you perform is how you immerse the audience and how their participation is actively encouraged. Can you explain why that is so important to you?

“You need and require interaction between people that you are speaking to and for. There is also an aspiration to seek and express truth as well. I think people are coming not just to showcase a talent but to reach a level of baring and peeling and releasing and healing. I think the audience is drawn to that.  Then they hold the people sharing with an openness and care as well. It’s not just when people are dancing and chanting but it’s also when people are deeply listening as well.

“This made me think about a great South African artist, Bheki Mseleku. I was watching an interview with him recently.  He said beyond everything it’s all about love. It’s that feeling of connection with each other.  If you are really trying to be open to that and you let that energy out, then you start sharing feelings in the room. And the whole idea is, how do we share that feeling all at the same time in one place?  Music is the stimulation for that.

“Especially in a society where being emotional is not encouraged.  It’s important to bring emotion back into art and back into life and back into practice.  A lot of the answers that we stand to find in how to work on ourselves and our society is recognising our emotions and understanding those emotions.”

Why do you think Steam Down is so relevant and engaging to people right now? How do you feel you fit into the bigger picture?

“I don’t feel like we do fit into any existing picture. There really aren’t any spaces made for what we want to do. Apparently, people like misfits.  It’s about creating an alternative to what’s currently out there.

“If I’d had this when I was fifteen, then game over. I want to engage with younger people because it’s difficult to be young –  it’s hard –and you need guidance. I would like to think we can be role models.

“There was an Instagram post the other day that I saw, it said if there’s a story that really needs to be told and it doesn’t exist, then write that story. When I think about that and then I think about leadership, I think of the saying ‘lead by example’. I think of taking the initiative to create those things that you feel are lacking.

“I also consider leadership to be a position of being at service; when you lead you to put yourself at service to everyone that you ask to follow.  You can only ask for that devotion from other people when it is going to benefit, and the benefit is for everybody. So, reflecting on leadership in that way constantly keeps your intention focused and pure, and that leaves room for mistakes because nobody is perfect. When you make mistakes, you go back to the drawing board. You never give up because you had that vision.”

As you are starting to see the impact you are making and seeing the club night really take off, what’s been the group’s highlight to date?

“There are so many, there is one for every mood. Every time you really need something, it’s there. Even when you don’t expect to get any more, and you feel like you’ve gotten everything you can out of it, like, I’m too sad to get anything, or I’m too hyper to get anything, you still get something. It’s relentless.”

This week marks our one year anniversary. Thank you to everyone that's come to share in and support what we are doing.

What’s in the future for you guys?

“There is definitely planning and there is definitely a future.  Long term, we have a collective voice but we also have brilliant individual voices and it really needs to be a space where each of us as individuals shares what we do. We want to keep that diversity of perspective where everybody is rooted in something that is sincere. That is the core ethos: our long-term mission statement.

“As the project expands we keep reflecting to maintain the intention, the purpose and the feeling and see if we can scale it up without losing it. That is the most difficult part of it.

“In the very near future, 17th November, we are going to be playing at the Albany. We’ll have harps and stuff! And we’ll be exploring different states of awareness in sound. It will be very open and improvised. And then in January, we are going to record and going to film it live. Next year we’ll also be doing bits of touring, so I guess watch this space.”