An hour before Vieux Farka Touré is due on stage at The Jazz Café during his UK tour, he generously agreed to spend fifteen minutes sharing his thoughts about his latest music. Son of Grammy award-winning Malian blues musician, Ali Farka Touré, he has also achieved the status of globally renowned guitarist and songwriter.  He has been recording music for over ten years and is known for his intricate guitar riffs and traditional vocals.  He mingles desert blues with Western Rock influences from the seventies and eighties and his latest release, Samba (Six Degrees Records), is his first solo album for five years.

Wearing a cheerful smile upon a bruised Chesterfield, he beckoned me into the cramped backstage area.  We talked about whether he was excited to be back in London, how he approaches writing and how the music context is different in Mali to Britain.

“I am so excited to be back in the UK because I only get to come here a few times a year.  I keep my tours short and I am already half way through it. I am proud to say that I’ll be playing my last night of the tour at Glastonbury, opening the festival on one of the big stages”.

He reveals both his hospitality and cheeky banter as he invites me to join him at the festival as if he could sense my jealousy. However, playing these larger stages is new to Vieux. As both his own notoriety and African music has become more popular in the UK, he continues to play to bigger crowds but talks about how he still prefers intimate gigs.

“I don’t like the bigger venues where you can’t see everyone’s faces. I love to feel that I have the people with me. It helps me to be able to see what each person is feeling and what they want in order for me to connect with them.  Everybody in the audience needs to feel the spirit of the music!”

As one of the best-known Malian musicians in the UK, he represents what many British people know of Mali and he talks about the pressure he feels as an artist to fairly represent the country.

“Most people I play to in Britain have never been to Mali and have no idea what it is like. Part of my job is to show them some of our traditions and let them enjoy our music.  Mali is such a big place and I can only show them a little piece of that, but hopefully, that takes them on a journey to learn more”.

It is both an honour and a burden he carries but he does so with pride. Vieux then explains that he also carries similar responsibilities in his home country, but also how younger listeners have turned their ear to different styles.

“The people of Mali don’t have time to watch TV since they are busy working on farms, so music is what they listen to all day long, wherever they are. Music is the best way to get a message across to a large audience. This is kept in mind at the essence of everything I write.

I only get to play live in Mali once or twice a year and, when I do, I am playing to mainly white people. I rarely have anyone below the age of 25 in the audience. They are no longer interested in this style of music as they prefer to listen to pop songs from Nigeria or America. I don’t understand why young people would want to listen to the same lyrics about making love all the time!”

Mali has a turbulent history and I probed about whether he ever feels constrained as to what he can write about and whether he can approach certain political messages, given that some governments have been known to censor what is heard.

“I have never had any connection with the government and, as musicians, we have ways of singing things without directly saying something.  We can convey the same message by going around the subject. But I don’t have anything directly bad to say about Mali’s political situation, I am just singing about real life”.

When talking about what drives him to write, he also divulges what his latest album, Samba, is about.

“When I write, I pen lyrics foremost for my family, then for my country and then for the world. Samba is written with all of this in mind and addresses some of the political issues that you can see in Syria and Afghanistan and places like that.  It’s important to me that I am giving to the people and providing education. I am letting Malian people know what is happening in the rest of the world”.

There is a rumbling movement in the UK, where musicians are becoming more politically charged and it’s clear that Vieux shares this sentiment and believes this is an important responsibility for any musician.  I asked him what his favourite thing to do outside of music is in order to escape this intensity.

“My highlights in life are when I am at home with my family. I sit outside and drink tea. I have a big family: three kids, wife, mum, sisters and aunts.  We all live under one roof.  This for me is the most beautiful part of my life”.

Knowing that Vieux has to hit the stage shortly, I rounded up our discussion by asking what he has lined up next.

We chuckled and I playfully reminded him about his intent to ensure that the music always has depth and spirit. I suggested that maybe he should go back to his roots and strip the sound back to basics.

“Yes exactly, I think I might do something acoustic. Just myself and my guitar and maybe a calabash”.

It’s humbling to know that someone of his success and stature feels a duty and maintains a commitment to his listeners.  As he walks on stage shortly after, the audience welcomes him with big cheers. Immediately dancing and recognising his tunes, it’s obvious that he has already achieved that connection across cultures. He represents a lineage of musicianship handed down through many generations and is a proud ambassador for the spirit of long-established Malian music. 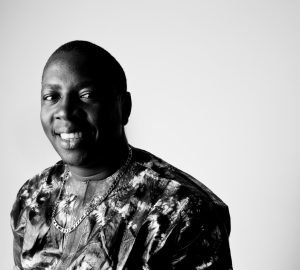