Justin Adams, guitarist and producer, is notorious for his love of the North/West African blues grooves. In previous years he had already appeared in projects with Mauro Durante and his seven-piece band, Canzoniere Grecanico Salentino. Known for his violin and percussive abilities, Mauro performs music from Southern Italy, the pizzica dance music in particular – he has been celebrated for his involvement in keeping the tradition alive.

The two joined  together on the collaborative album project Still Moving which was released in October 2021. The duo publicised a live video, recorded at Real World Studios, performing tracks found on the album and are about to embark on a live UK tour from the 15th of May 2022.

With a stripped back approach to the project through improvisation and real time recordings, the music is driven by deep and turbulent emotion. The album is liberating, emotive and highly unpredictable from a listener’s point of view. Still Moving in essence, is music for healing.

We reached out to Justin and Mauro to find out how their paths crossed, to learn more about their collaborative project and get a feel for what to expect in the coming months.

Rhythm Passport – The music retains the quintessential Adams and Durante distinctions in sound that are unique to yourselves, but the music blends and moves with a raw and changeable energy. Improvisation and real time performance I know can be deeply powerful, can either of you recall a moment throughout the project where your music transcended most fluidly and with the greatest enjoyment?

Justin Adams – In our music we use very old musical scales and rhythms that are powerful and flexible- there are often moments in our gigs where I’m surprised that there are just two of us doing quite simple things, but the overall sound becomes really big and emotive.

RP – You’ve both been on very different musical paths throughout your careers, can you recall the events that led to this collaboration? What was it about each other musically that you were both drawn towards?

Mauro Durante – We first met back in 2011, at La Notte della Taranta Festival in Salento, my home area, which was directed by Ludovico Einaudi. I was his assistant and right hand, Justin was one of the guests. Before even speaking to each other for real, Justin and I met by playing and making music together. That’s what we’ve kept doing ever since! We easily fall in love with repetitive grooves, melodic modes or patterns, music that can help transcend. No need for many notes, we are looking for music you can feel with your body.

RP – Is there anything in particular that makes this collaborative project different and stand out in relation to the other music experiences that you have launched and/or participated in?

JA – To do something as stripped down as this is special – also the context in terms of the pandemic has given the project a phoenix-like energy.

JA – Mauro has an amazing blend of being rooted in tradition, but at the same time contemporary and universal, and 100% committed to music in his life, which makes him an ideal collaborator.

MD – Justin has this unique gift of being groovy in an effortless and special way. Every single note he plays is part of the flow. I find it enchanting. I feel blessed to have the chance to make music with him.

RP – I am familiar with the music of North/West African, Justin’s guitar style delivers a lot of this, Ali Farke Touré and Tinariwen of course sprung to mind immediately on a few tracks. I know less about the traditional music of Italy and Mauro’s influences here, what was it about the Italian tradition and Justin’s handiwork that married so well?

MD – The process is the same, rhythmic and melodic patterns are being repeated, and micro-variated. The iteration and the ability not to sound exactly the same without losing momentum and groove are crucial. Our music styles, like all folk traditions, were married to their own different functions.

RP – What’s the story behind the title track on the album “Still Moving”?

JA – I had been reading Homer’s Odyssey and was struck at how the story of a man forced by crazy forces of war, jealousy and revenge to be thrown around the Mediterranean, shipwrecked and unrecognised, had resonance with the situation of so many refugees now.

RP – How was it to work on a collaborative project in these Covid times?

MD – Hard, we had to adapt a lot. But it also helped give us intensity, a special commitment to make it happen.

RP – Since you are both used to playing among bigger bands, how are you handling the more intimate affair, and how does it contrast?

MD – It sounds great. Feeling the space, and how our sounds can fill that. Feeling that power, something we couldn’t experience in bigger bands.

RP – You are due to perform a number of gigs this year, what should we expect in the coming months?

MD – After touring Slovenia and Czechia in the last two months, we are looking forward to restarting travelling with our music with shows planned in Italy, UK, France, Reunion Island, Spain…

RP – In a few weeks’ time you are going to be in London to perform at the Jazz Cafe. Since it’s going to be quite a unique event, how would you introduce it to our readers and invite them to join you?

JA – In London and Brighton we’ll do a double bill with Canzoniere Grecanico Salentino. CGS are a whirlwind of dance, trance drumming and aching Southern Mediterranean melody, while the duo presents two storied musicians in a raw and intimate setting that goes straight to the heart. 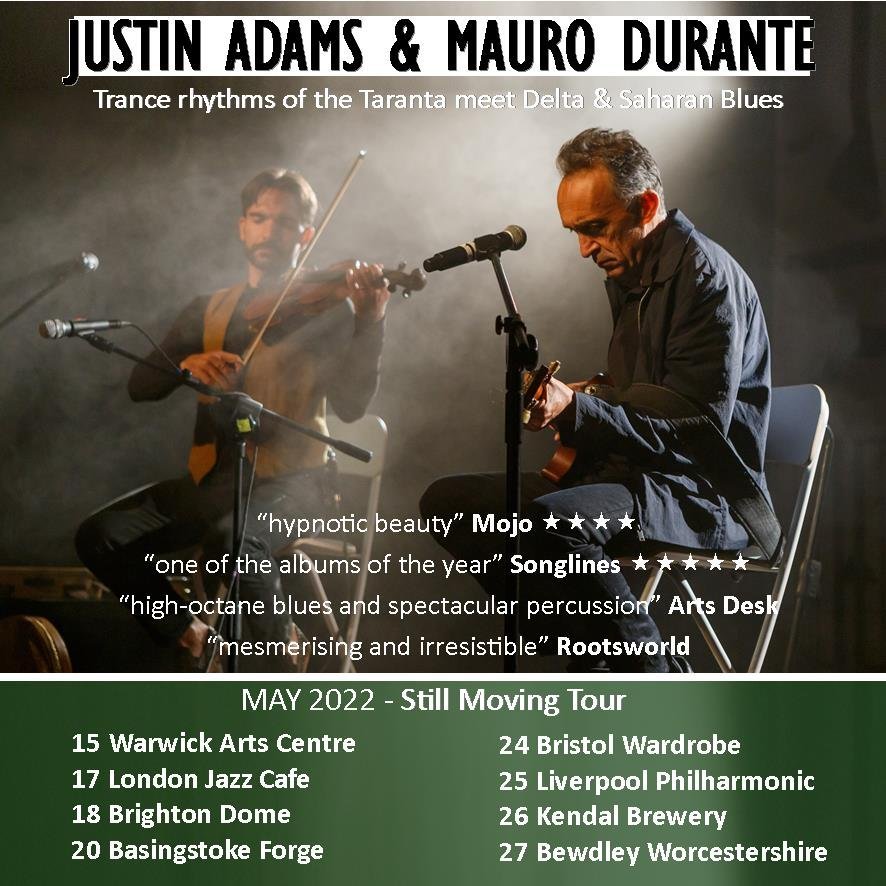