It goes without saying that we will miss Bandcamp Fridays… Today, till midnight (Pacific Time), is indeed the last appointment with one of our favourite initiatives meant to support and bring some well-deserved fee-free income to the pocketsof labels and musicians. So, to celebrate the 10th Bandcamp Friday of this mad year, we have put together a few shopping tips featuring some of the most interesting new releases you can buy on the website.

Check them out and sort out your Christmas gift list well in advance!

The first entry is an EP released today for the occasion. Marimbas del Guapi is an inspiring collaborative work between four remarkable interpreters of Afro-Colombian and Latin music: Uji, Dinastía Torres brothers Genaro and Pacho, and Hugo Candelario.

The outcome of their musical sharing is what you can expect when four talented and dedicated musicians work together. The five-track EP delves into the depths of the sound of marimba, unearthing its purest and rooted form and bringing it into a more contemporary dimension with free-wheeling electronic arrangements.

We are going to be honest; we are a bit biased towards Puerto Rican project ÌFÉ. Every time Otura Mun and music partners release something new, we fall head over heels in love with their distinct and soothing sound.

VV.AA. – Door to the Cosmos [On the Corner Records]

More than a compilation, Door to the Cosmos is On the Corner Records’s manifesto.

25 tracks, explaining in music what the forward-looking London-based label is and stands for, including all its influences and references from “Detroit, UK bass culture, New Orleans or the Niger delta”.

The fourth entry is arguably one of the most interesting collections dedicated to the legendary Congolese band O.K. Jazz and their leader Franco. This 23-track-strong album, released by Belgian label Planet Ilunga, is a full immersion into the purest form of Congolese rumba giving four different takes on the band and musical “eras”.

Franco and the O.K. Jazz are indeed one of the most representative names when it comes to soukous, they shaped the style and acted as reference for African and Latin musicians to come.

We move to South-East Africa now, to Zimbabwe and its rich music history, which is the inspiration for Analog Africa’s latest compilation. In the early 1970s, Thomas Mapfumo formed the Hallelujah Chicken Run Band, one of the first ensembles to use Shona language instead of English.

That fact was already a bold cultural and social statement in a period when Zimbabwe (at that time Rhodesia) was fighting for and asserting its independence. If you add Mapfumo’s personality and the electric arrangements with which the band “provoked” rumba and Afro-rock, you have the perfect musical explosive mix.

Not only one of the most exciting new releases on Bandcamp right now, but also one of our albums of 2020.

Irun by Copenhagen-based Tunisian DJ and producer Nuri, out on French label Shouka, brings North African sounds to the next level, bringing in influences from all over the continent and shifting them towards the future.

Irun is an intricate and finely chiselled work built on polyrhythmics, a ‘housey’ and dancy approach, field recordings collected from all over Africa, electronic arrangements and even techno and tribal depths.

Among loads of other (possibly even more significant) things, COVID-19 took the 2020’s festival season away from us too. And, among loads of other events, we couldn’t enjoy and dance to all the exciting sounds that Tropical Pressure sound systems usually bounce out from their speakers. Still, we can try to make up for the lost fun with the 12 tunes included in their compilation recalling what’s happened in the last 7 years and what will happen in the next years of one of our most beloved music festivals. Expect sounds from Latin America, the Caribbean, Africa and Europe in every shape and rhythm…

Not that 2020 treated us too kindly to be fair. So, Cretan Smash by London-based trio Balothizer, might be the best answer we can give it. The second album of the band sounds indeed like a musical middle finger to the year passing by.

However, next to its metal temperamental outbursts, Cretan Smash also stores a seasoned soul, which evokes the Cretan millenary music tradition dilating it with progressive mindset.

One of the most important releases of the year, perfectly timed for the last Bandcamp Friday of 2020.

We have waited eight years for a new album by Colombian Frente Cumbiero and, listening to Cera Perdida, the wait was entirely worth it. For their new work, the bogotano quartet, led by Mario Galeano, kept their ears tuned to the Colombian Caribbean Coast to reframe the concept of Tropicalismo or better, reword and reshape it into Tropicanibalismo.

Frente Cumbiero goes indeed far beyond a mere musical exploration into the abundance of rhythms and almost unlimited repertoire of the region and its golden era happened between the 1940s and ’60s. The ensemble kept their interpretive plug firmly connected to the identity discourse, bringing it forward also on a sound perspective through electronica and jazz.

Here’s a tribute to the “career” of a global beats institution.

Back in 2005, German DJ, producer and music journalist Daniel Haaksman decided to launch a music label. 15 years and hundreds of releases later, Man Recordings has become an invaluable resource for everyone looking for new (and old) sounds from the Southern Hemisphere to dance to them.

From baile funk to kuduro and tropical bass to electro cumbia, in this 15 track compilation you’ll find the Man Recordings musical credo.

Fancy some pure and genuine music joy? Then Star Feminine Band is what you should look for and listen to.

The all-female band from Benin and their heartening and inspiring Afro-fusion sound are what you need to forget at least some of the hardships of 2020. The seven-piece band, with members aged between 10 and 17, came together during a music training camp in 2016. Since then, they went on playing, rehearsing and composing music together, in a country where women musicians are the exception.

In their first eponymous album, they gather influences from far and wide over the African continent, from afrobeat to rumba, Afro-psychedelia to highlife, from rock to their local Beninese sato. But what hits and sticks is the energetic and straightforward message stored in their lyrics, meant to shine a light on women’s conditions and empower them, whatever their age.

For the last entry, we trespass into hip-hop borders for an outstanding album. Quakers are a UK-based trio of producers formed by Fuzzface, 7-Stu-7 and Katalyst.

For II, which followed eight years after their monumental debut album I, they gathered a pool of 32 beatmakers and vocalists for 33 tracks ranging from old-skool hip-hop to experimental beats, R&B to funk, soul to electronica and all in between. 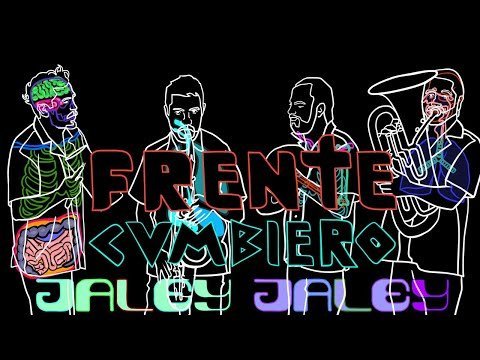 Colombian ‘Tropicanibalist’ Frente Cumbiero just released a video for their tune ‘Jaley Jaley’ extracted from their latest album Cera Perdida: https://ffm.to/ej91v8m The album, published in November on Biche, is a “very Frente Cumbiero” response to 2020, reflecting on the Colombian state of affairs and the protests happening around the country… In 1974, Muhammed Ali fought George Foreman for the world heavyweight boxing championship. ‘The Rumble in the Jungle’ took place in Kinshasa, Zaire (now DRC) and was preceded by a promotional, three-day festival of soul music, including major acts such as James Brown, Bill Withers, BB King and The Pointer… Your Ticket To… Benga

Kenya is rich in musical history, from the much loved taarab through to caracha and more recently cumulating reggae and even rock scenes. Stripping Kenyan music back to its origins however, reveals the culture shifting style of benga, a beautiful finger and thumb guitar style originating in Eastern Kenya in… Daniel Haaksman is a superstar DJ in the making. His unique take on global rhythms has seen him receive many accolades, even filling in for Diplo on BBC Radio 1. With his distinctive, baile funk sound, this German selector and label boss has consistently been at the forefront of the global…