There are not many musical happenings which ooze summer from every pore like Campfire Club‘s heartening gigs.

Organised by The Nest Collective, the most welcoming music series of the season is ready to build a few fire pits around South and East London and call together hundreds of folks, world sounds and music enthusiasts to enjoy 27 shows by eclectic and remarkable artists.

It will all start tonight (18th May) at Glengall Wharf Garden in Peckham. There, singer-songwriters and guitarists Piers Faccini and Jim Ghedi will light up the night with their experimental folk sensibility.

Then, in two weeks’ time (1st June), Senegalese griot Seckou Keita and his kora will create an unforgivable music experience somewhere in Bow – the location of the campfire is still secret.

On the 9th June, there will be one of the highlights of the programme with Unamplifire Festival. For the occasion, the campfire will be stoked and fuelled to become a musical bonfire, which will be crackling from 3PM to 11PM at the Master Shipwrights Palace in Deptford. You’ll be treated to some of the finest folk and traditional sounds; rigorous, with no cables attached, including tunes played by Nest Collective host Sam Lee, Irish-American singer and multi-instrumentalist Sam Amidon, Malawi Afro-soul composer, singer and activist Faith Mussa, ol’ time and blues “re-interpreter” Leonie Evans and many more…

Not having enough space to mention all the events in the rich calendar, we have picked a few more of the best for you.

Starting from the 21st June, the captivating storytelling talent of the Embers Collective will charm the South-East London audience in a secret location in Brockley. On the 6th July, passionate singer-songwriter, composer and activist Chris Wood will take no time in letting you understand why he has won several folk music awards. Don’t miss the chance to be enriched by his sharp and bright lyrics at the Lumpy Hill Adventure Playground in Islington. Then, on the 20th July, it will be the turn of the inspired London Bulgarian Choir to move your soul. They’ll be performing at Bethnal Green Nature Reserve together with Devon-based duo Harbottle & Jonas.

Less than a week later (26th July), from Rwanda, the Pygmy group of Abatwa will bring to London their personal experiences, stories of their rural community, and traditional instruments. While on the 17th August, folksongs from the Scandinavian and Nepalese tradition will come together in Islington and harmonise with each other thanks to Åkervinda and Night. On the same night, in Bethnal Green, Malawian Gasper Nali will perform his one-of-a-kind babatoni: a hand-made, three-metre-long, single-string bass guitar. Supporting him will be Ellie Ford and her harp.

We move onto September when on the 7th She’Koyokh and Farafi will give life to an exciting double-bill, fusing together klezmer, Middle Eastern, Balkan and North African traditions with loads of energy and rhythm. Finally, on the 28th September, the Campfire Club‘s musical fire will be extinguished for its 2018 edition. It goes without saying that it will be done in the most fitting way; hosted on the Stockwell Oasis Nature Garden’s stage, by three musicians who have made songwriting their artistic way of life, Kit Hawes, Aaron Catlow and Jake Morley.

So, from tonight, gather together around the Nest Collective’s campfire to enjoy plenty of comfy notes, heart-warming stories and radiant smiles. 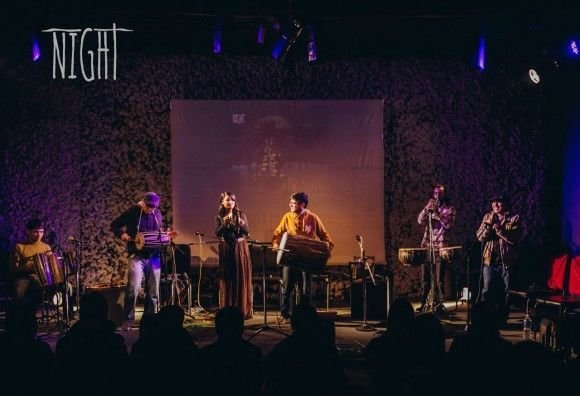 Describing themselves as a ‘new-school folk band’ Night have sought out traditional instrumentation and stories of day to day life from throughout their native Nepal, blending these influences together to create a body of material aimed at raising the profile of traditional culture and contemporary socio-political matters. In their song…