This incredible live show brings on stage a live sonorization of the original soundtrack to critically acclaimed La Haine (dir. Mathieu Kassovitz, 1995) played live by the band while the movie airs in the background, for a unique and powerful journey between music and frames.

Steve Chandra (guitar), Dr Das (bass) and Brian Fairbairn (drums) of legendary Asian Dub Foundation, a band that has always been politically and socially involved: in their most-critically acclaimed album, Enemy of the Enemy, there’s a related song inspired by the film, called La Haine, which reflects their deep commitment to this project.

What people are saying

'The film had little music, just tense silences punctuated by obscenities. Asian Dub Foundation's live score changes all that. In fighting hard against racism and for natural justice, the five-piece band has been Britain's spiritual heir to the combative conscience of The Clash.' The Sydney Morning Herald

'The film starts to roll with images of Paris burning, looting and rioters beaten by police, its soundtrack, played live by Asian Dub Foundation, throbbing through the hall. For the next few hours, no one moves' The Guardian

'...and with the Asian Dub Foundation in place to soundtrack the feature, the opening scenes of riots, youth violence and police brutality played out to the sound of hard ragga-jungle rhythms, indo-dub basslines and searing sitar-inspired guitars. For 98 mins ADF's live score overlaid the French dialogue and action leaving the audience with only the subtitles and actors to guide you through the intense story. Altogether, a reimagining of the live orchestra and silent film presentations for the modern, urban age.' Huffington Post 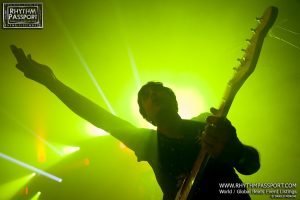