We are very pleased to announce the launch of our Debut Album NAMLO – on 2nd of March at Rich Mix, London.
The Album launch concert is an exclusive opportunity to see all of these great artists perform in one night.

Hosts :
Wallee McDonnell - Celebrate Life Events
Celebrate Life is essentially three people, Wallee, Roni and Wendy. We all have a passion for the arts and combining the arts with a meaningful message. We started out four years ago with the same ambitions as today but much fewer resources. Little by little we are growing. Collaborations have become a large part of what we do, and the volunteer help has expanded hugely, but at the core we are still three people who get together and work out the next events. Below is a bit more about each of us, how our journey has lead us to here and why we do what we do.
http://www.celebrate-life.co.uk/who-we-are

DJ Ritu - A world in London DJ/Radio Presenter/Event host/compere/Illustrator/Band Leader/Workshop Leader
31 Years On The Turntables For Bollywood, World and Pop Pioneer
East London born DJ Ritu began her career as a Pop music DJ in
1986. She was head-hunted by new global beats club ASIA in Islington, which propelled her into the World Music scene. Working alongside African expert David McAlmont (later McAlmont & Butler) and Rai & Latin aficionado Don Tyler, she quickly fell in love with music by The Bhundu Boys, Chaba Fadela, and Sierra Maestra. Gaining in reputation as a ‘bhangra expert’ she began touring abroad in 1991, often the first DJ to introduce Indian sounds in many countries, while guesting at legendary global music clubs in the UK such as The Mambo Inn.

Support Act of the evening:
Merlyn Driver : Merlyn Driver is a singer songwriter from the Orkney Islands in the north of Scotland. He is currently based in London.
Artist Website :
http://merlyndriver.com/

Guest Artist :
kadaily Kouyote ( Kora)
Kadialy Kouyate is a musician, a singer songwriter inspired by the West African Griot repertoire. Born into the great line of Kouyate Griot in Southern Senegal, Kadialy’s mesmerising kora playing and singing style have been appreciated in many prestigious venues as both a soloist and in different ensembles.
Since his arrival in the UK Kadialy has played a significant part in enriching the London musical scene with his griot legacy. He has been teaching the Kora at Soas university of London for the last decade and he has also been involved in countless musical projects both as a collaborator and a session musician.
He is featured on several albums including:
-Champions of Africa – specially commissioned for the 2010 World Cup. (West One Music)
-Natural World: Mankind Vol.1 – The essential world music collection from around the globe. (West One Music)
Kadialy has played: The Royal Festival Hall, The O2 Arena, Queen Elizabeth Hall, Woodstock with Afro Celt Sound System (to an audience of 750,000), European tours, Australia, North America. Radio and TV appearances: BBC Radio 3 ‘World Routes’; Charlie Gillett’s ‘World of Music; BBC World Service (Radio and Television) amongst others

Namlo : Namlo is a London-based Nepalese band, committed to raise the profile of Nepali music in a global context. It is a unique collaboration of musicians inspired by Ganga Thapa, coming together to make Nepali music accessible in a contemporary way by fusing indigenous folk traditions with global influences.
We make music from our Homeland, Nepal. Our music draws from all the different tribes and region of Nepal which influences into our music. We combine all the different traditional style of music and adding our experiences of all the band members that result is cornucopia fusion of Nepalese traditional. Like the interweaving strap or (Namlo) of a weaving basket used in transportation of good; thus to the traditional Nepalese music of Multifarious communities and culture is showcased in a dedicated and sensitively interpreted. 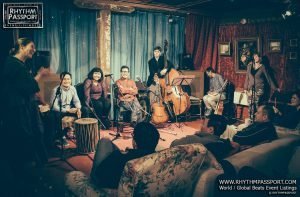