Feel the heat of Terakaft as they bring sun-scorched guitars and desert blues to East London.

Founded by former members of the desert-rock pioneers Tinariwen, Terakaft send listeners deep into the heart of the desert, perfectly reflecting Saharan sands with their rolling and evocative grooves. Formed in 2001, the group have since made the electric guitar completely their own. The stark and harsh conditions of their homeland powerfully permeates through their wild riffs, massed chants and soaring vocals.

Comprised of three members, all of whom sing and play guitar, the group is a perfect fusion of two rhythm guitarists; one bringing sweet and meticulously crafted melodies, while the other holds down an effortlessly rhythmic beat. Underlying all this is the heavy but purposeful tred of the the bass. With the notes of the lead guitar meandering us through a musical wasteland, and the heavy and pulsating heartbeat of the percussion (said to be like that of the “delicate but strong steps of a camel”)…. the group are an intrinsic embodiment of the wild and free terrain of their homeland.

Over the powerful composition of their music they have weaved stories of exile and loneliness in their mother tongue of “Tamashek”. Being born out of the crucible of the northern Mali’s 1980s and 90s rebels, the bands lyrics have been refined by the recent troubles of their homeland.

Guaranteed to heat up the Corsica Studios stage, this will be an unmissable opportunity to watch the Saharan bluesmen that are Terakaft live in London!

“With its rock-style production, heavy, looping percussion and melodic guitar lines, Terakaft is poised to find a large audience.” –The Green Man Review 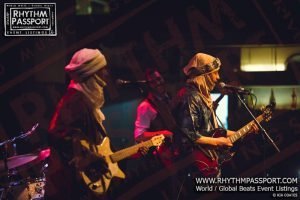