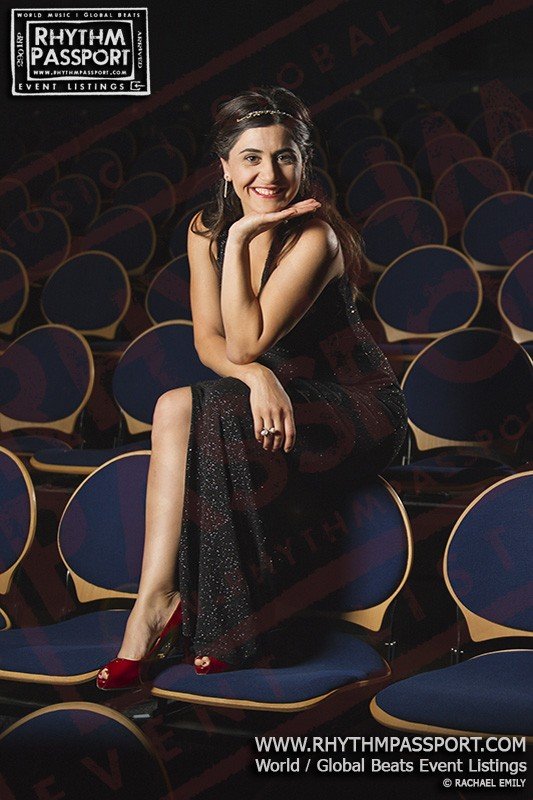 Çigdem Aslan is a rising star in the revival of Rebetiko, the ‘Blues of the Aegean’, originally sung in the cafés and music houses of Athens, Piraeus and Istanbul of the turbulent 1920s. A music culture shared by Greeks and Turks, Rebetiko was famously outlawed in both countries as a music of the underground. Born in Istanbul to Kurdish parents, now living in London, Çigdem’s delightful voice opens the door to songs which speak about life, love, hopes and struggles of everyday people. With an ensemble of top-class musicians, this is not to be missed.

Çigdem Aslan on her first date of her UK tour backed by four excellent musicians playing a variety of traditional instruments controlled the stage from the start and her delicate voice perfectly captures the feel and ambience of a Turkish and Greek music house. Playing songs from her critically acclaimed album called “Mortissa”, she mesmerized the audience with her amazing vocal range. Her charm came to the fore between songs as she explained the meaning behind the lyrics and the history of the songs. This was a Sunday night, but the audience was very enthusiastic clapping along, with the Greeks and Turks amongst us calling out their approval. The performance was split into two pieces, with an encore that featured a vocal only version of a traditional song sung in Kurdish that her mother had taught her. Cigdem will do for Rebetiko, what Mariza has done for Fado – Next time, I would like to see her perform in a North London Greek/Turkish bar to get the real feel for the songs. Nonetheless a charming performance.