Everyone knows a ‘Dame Blanche’, but only a few of us are lucky enough to know one who’s an electrifying singer, remarkable flautist and a natural show woman.

Our own Dame Blanche is indeed all of these things and more; Yaite Ramos Rodriguez (her real name) is, without a doubt, an accomplished musician. Born in Cuba, she grew up in a musical family – her father is the remarkable trombonist Jesus “Aguaje” Ramos – and received a classical music education, which later allowed her to become a jazz musician. However, a change was on the horizon as Europe, Paris in particular, changed her perspective.

She chose to move to France and give a crucial turn to her sound. She fully embraced hip-hop and enhanced it with electronic arrangements, without losing sight of her Afro-Latin and Afro-Caribbean roots. A few days ago, La Dame Blanche released her third album, Bajo El Mismo Cielo, and she’s ready to bring her very own cuban around Europe for her upcoming tour.

We met her at Womex a few months ago and tried to find out a bit more about the romantic music heroin called La Dame Blanche.

“La Dame Blanche is a legendary character; every people [sic] know a Dame Blanche. I’m a Dame Blanche with a different message: I’m a black lady, who’s really free, – I smoke tobacco for example – but I have an objective, which is to make the everyday things easier. I want to soothe everyone’s everyday life through my music. If you’d like to take a break from everything, do it with my music. I’ve many ambitions, but the main one is to help you; if you want to turn your day around, listen to my music!

My music was born outside my country, but despite that people have always understood what I sing and play. Since I write and sing in Spanish, I think that the audience can perceive the melancholy in my music and can relate to that message. Then, it’s really important to me to convey my messages visually; I’ve tried it many times and that has always worked. So, for now, the language is not a barrier. That’s also happening when I send social messages. I’m not a political artist, I don’t do politics in any way, but my music has a strong social message. My story and my songs are based on real facts, on what’s happened in my life and people I love, people who are really sensitive and simple. Those are the stories that deserve to be sung and recorded, also because I don’t want people to forget them. They are common people stories, narrating their everyday lives. Under this aspect my songs have a social and even political nature.”

It goes without saying that Yaite wasn’t born La Dame Blanche, but she has shaped and is still fine-tuning that character.

“I’m a Latin jazz singer and classical flautist, so hip-hop is a new territory for me; a place where I go only when I’m La Dame Blanche. Because of this, the more I play it, the more I feel confident. This is also how I deal with the different subjects in my lyrics. In the beginning, when I was writing my first songs, I was pretty shy. I was careful about using the right words and not to hurt people. While today, I feel free to say things, and you are free to understand whatever you like to understand. So yes, I’m definitely more confident and positive now. I still have many, many things that I’d like to do and experiment [with] in my music, enough to keep me busy for the next 20 years at least!”

Her artistic vision and aims are pretty clear in her mind and are chiselling her sound in vivid details.

“I always say to Babylotion [producer Marc Damblé] that I want a pure and quintessential hip-hop sound from him. That’s because the Latin and Cuban aspects are my prerogative, my appanage. I don’t want to infiltrate those sounds [with] my music from the outside. If I want to play a cumbia, then I will play a traditional cumbia, but when I play hip-hop, I want it pure and then work on it. I want to smear it with my cubanía (being Cuban), my flute and my style, so the final outcome can be 100% mine and people can recognise myself listening to it. I’d like them say, “Oh, that’s La Dame Blanche playing.” I want to call myself an urban hip-hop musician and if I haven’t reached that point yet, that’s something I’ll reach in the future.”

Then there’s the contribution of her personal life: Cuba, her family environment and music encounters she’s had along the way.

“My family influenced me a lot. My father, my uncle, my cousin and many friends have directly influenced my music, and the Cuban Latin jazz scene had a part in it too. But my music is also what I live: my personal experiences and collaborations, they have all influenced my music. For example, I learnt a lot from the period when I worked with Sergent Garcia and Emiliano Gómez (aka El Hijo de la Cumbia). They helped me growing musically. Emiliano has also released my second album 2 and I identify myself a lot in him, both in his music and attitude. By the way, if I have to mention only one of them, I’d say that my main influence is life; everything happening in my everyday life, both good and bad.”

Despite moving to Paris to broaden her artistic horizons, her new residency hasn’t undermined her unconditional love for her island in the slightest. Yaite found her feet both in France and Cuba.

“Today, I live between Paris and Cuba (Pinar del Rio). There are many differences between the two places. What I like about Paris is that I can play and listen to whatever I want; people are exposed to every kind of music and you can collaborate with musicians from all over the world. That’s why I’m welcoming many different influences in my music. I feel that hip-hop can relate with every other style, from Latin music and cumbia, for example, to sounds coming from all over the world. For this reason, I’m really free and I think that some of the best music encounters I had, happened in Paris.

At the same time, Cuba is my paradise and my pride: Cuba gave me everything. If I’m what I am today, the woman I am, it’s all thanks to Cuba. Also, if I’m the musician I am, I owe it all to Cuba. I still have many good relationships there. At the same time, I still haven’t brought La Dame Blanche to Cuba: I never performed there my project. I don’t feel like going back to Cuba and entering the front door using the name to my family. I don’t want to play in the easy way. So, I’ll wait until the moment comes, when people there will eventually call me. Even if that will take longer and I’ll need to work harder to reach that point, that’s going to be even more gratifying for me.”

As a matter of fact, there’s no shortage of potential ‘competitors’ in Cuba. Even if the local hip-hop scene is not as popular abroad as much as more traditional styles like salsa or son, its quality is indisputable.

“We have been an island for a long time withdrawn until not long ago. That gave us the opportunity to cultivate our tradition, so there are things that are quintessentially Cuban, like timba for example. Only a Cuban can understand the adrenaline inherent in the style. But now, through hip-hop, we can free it and bring our music outside Cuba to a wider audience. Finally, Cuban talents are acknowledged abroad, and we make fully [sic] use of our music qualities. That’s also why we feel free now. We still need to pay attention to what we say and how we say it, but there’s definitely more freedom now.

Cuban hip-hop is already pretty good and the scene is growing day after day. Even female musicians, who are usually not much considered, are getting more and more important roles in the scene and their quality is really high. I know two Cuban rappers who I think very highly of. They are called La Reyna y la Real and are a really powerful duo. They have a different way of playing hip-hop and talk about things that are really worthy to be taken into consideration. That’s why I really like their style.”

La Dame Blanche can be easily described as a Cuban hip-hop ambassador to the world and her latest release is here to confirm it.

“Bajo El Mismo Cielo has been ready for a while. That’s mainly because I’m an organic and impulsive artist, so if it was for me, it was going to be out months ago. But since I had to follow the protocol, I had to wait for releasing it.

I feel that it’s a pretty important step in my career. It’s an important work for me, starting from its title. This is the first time I say it, but despite as La Dame Blanche I took a lot from my father, from his musicianship and talent to his ambition, this album is dedicated to the extraordinary fighter who’s my mother. That’s why, since the title, I wanted to let her know that even if I’m far away from her, even if I’m in France and she’s in Cuba, I’m under the same sky (bajo el mismo cielo).”

We also hope to be under La Dame Blanche’s same sky once again in the near future. Her summer agenda looks pretty busy and her tour will bring her around Europe and North America, with a stopover in the UK too to perform at WOMAD on the last weekend of July. Radio Mukambo takes us to the beat of hiphop music but also quite some reggae beats with L’Entourloop. The French duo of beatmakers’ new album La Clarté Dans La Confusion is our album of the week. They will have an exclusive show in Brussels on 15/10 at La Madeleine with N’Zeng,… 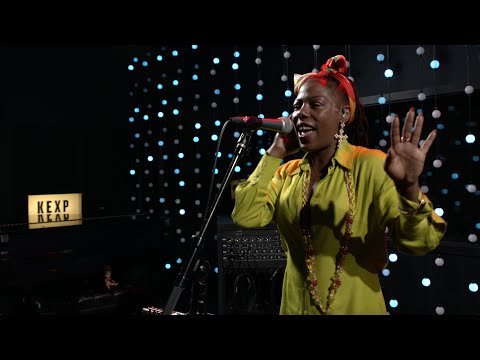