The Republic of Haiti was founded as a utopian ideal. Haiti meaning ‘country of mountains’, its name in homage to the native Taíno who developed the revolutionary culture alongside maroon slaves that led to the victory that was the Haitian Revolution. Haiti’s liberator and first emperor Jacques 1er did not allow for an aristocracy, and instead was the only aristocrat asked by the people to take on such a role. He was ambushed and assassinated by a conspiracy that would lead to two countries and aristocracies, one in the north led by Alexandre Pétion, and one in the south by Henri Christophe, which would become one when Christophe, the self-declared Emperor, committed suicide. The man who would unite these two aristocracies into one was Jean-Pierre Boyer, one of Haiti’s worst rulers. He would attempt to impose a code of laws, the ‘Code Boyer’, which tied peasants to working the land and not moving to the cities – an unsuccessful attempt at reproducing slavery by another name, ‘stratification’, which still haunts Haiti today.

Haiti has had a special aristocracy. As if Sparta and others, the wealthy were first given land, and favours, by the state – this all while being presented as a bourgeoisie, or those who labour for their wealth. From this absurdity, as if to break away from both matrix and shadow, has seen the coming about of both rural and urban countercultures, of those who are not ‘born well’ or against the whole idea. This counterculture has been resilient enough not only to combat the Haitian bourgeois-aristocrats, to add to them oligarchs and foreign governments but to retain much of African culture. In music, this is manifested as counter-cultural Vodou.

Chouk Bwa is the very best of this counter-cultural Vodou, or Rasin, music. I sat with their producer Michael Wolteche over Skype to discuss the band, its purpose, present, and future. We laughed wholeheartedly as he went over the convictions he had grown as a producer living in the rabbit hole that is dealing with Haitian culture. The following is an interview written out of our conversation, held in French.

Rhythm Passport: What I love most about Chouk Bwa is the rawness of the sound.

Michael Wolteche: The raw, ‘dry’ sounds that you hear are purposely so. That is Vodou. My work with Chouk Bwa is not to misrepresent Vodou culture, but to enunciate their project as a band.

RP: That’s a unique position to take in Haitian music today, now well-known for the heavy-handedness of some of its producers.

MW: It is, but it is certainly our position. What’s important is that, with Chouk Bwa Libète, the band’s music is conveyed. Our new project is less dry and will connect Chouk drums to machines, but keep the natural ceremonial flow that you can hear in the first album. That way our songs are the art of Chouk Bwa, which, I feel, is ‘faith is beauty’.

RP: Who writes Chouk Bwa’s songs? I know that, in Haiti, there is a long tradition of lyric writing as a beloved art, and Chouk Bwa seems to continue in that vein.

MW: The songs are Vodou songs and, as such, are traditional songs, the ones you have heard, or rooted in tradition. The lyrics themselves are written by Sambaton, the Samba and lyric writer of the group.

RP: Your Rasin music seems to be very different from the traditional Haitian Rasin. Chouk Bwa sounds like a Rasin Seche band, for example, Azor, but there seems to also be loads of modernity along with that.

MW: The project is to bring modernity to Haitian art, actual Haiti and not a fiction of it, through modern techniques which enunciate the culture that I encountered on my visits. I have grand dreams for Haitian music and I love the culture. I am not going to go into detail but I think that Haitian culture and music is not done justice by many of the producers of its music, including those on the island. There’s the necessity to care for this music, bloom it, and I am fulfilling the role I believe I should be fulfilling, the one that I believe that Haitian music is owed.

RP: Are there any political convictions that come with such a dream?

MW: Political? Ha-ha! I’d say fraternal relations with a culture that I love. What it means for me to produce Haitian music is not to kill it, and that’s what matters in the end, for Haiti is beautiful.

RP: Chouk Bwa is a document as much as it is music?

MW: Yes. It documents Haiti and Haitian spirit. Haitian culture, like all music, is documents of the present. It documents the convictions of a band, of minds, of it as the present. There is a lot of potential to Haitian music in its present state, as a testament to Haiti’s present, and Chouk Bwa is not my last project with Haitian music. Vodou is a glorious religion, glorious culture, and the manifestation of it is beautiful in itself. That is my conviction, as Chouk Bwa’s producer.

MW: It will be amazing. We have been working hard as a collective, which includes photographer Thomas Freteur, who has directed videos for Chouk Bwa. We are working in tandem to do Haiti justice, the wonderful country which I love! 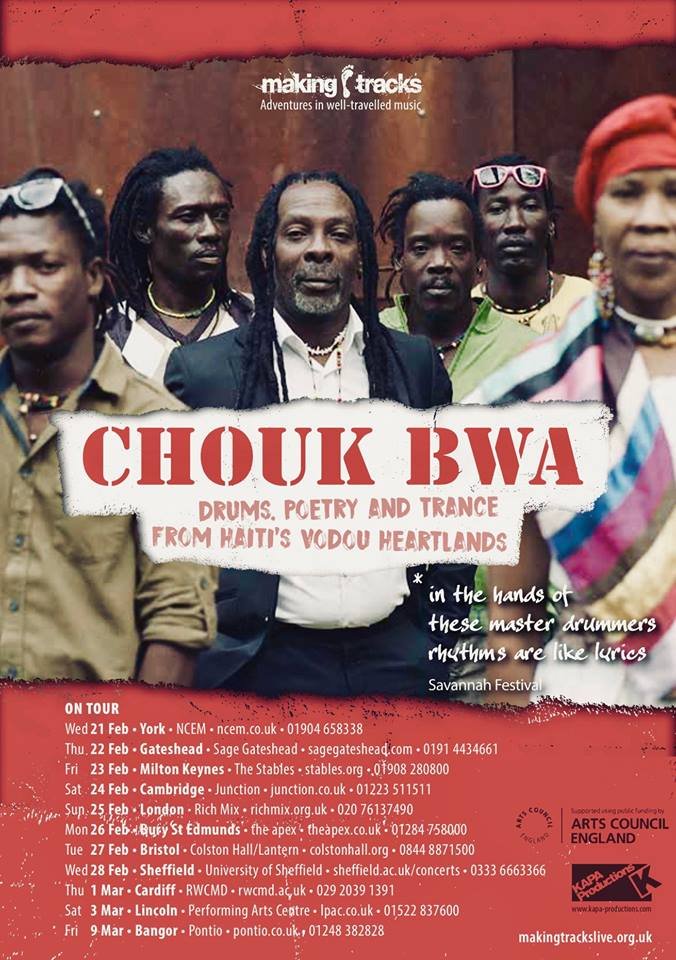 Vodou Alé (Les Disques Bongo Joe) is not simply inspired by the ritualistic archetype that is voodoo, in fact, it is the perfect antidote to this esoteric paradigm of the Haitian tradition. Native to Haiti itself, Chouk Bwa are first-hand practitioners of the vodou faith of west African descent, their music…