Most would agree that stepping into the shoes of one of history’s most celebrated musicians would be just a little intimidating. So it’s difficult to feel anything but respect for Dwayne ‘Danglin’ Anglin of Jamaica, who stepped into the shoes of Bob Marley and joined The Wailers in 2010.

Even though Danglin is too young to have ever met Marley, he says that he meets him “through the music”. Sitting and speaking to him backstage (after The Wailers gig at IndigO2) felt no different to how it might have felt to speak to Bob Marley himself. His words just as resonant; his message just as powerful.

Bob Marley led The Wailers from the mid-1960s until his death in 1981, spreading the rhythms of his Jamaican homeland with classics like ‘No Woman No Cry‘ and ‘Get Up, Stand Up’. Of course, Marley’s spirit will always be entwined with the music – there is no Wailers without Bob Marley. So the question of what it feels like to preserve his legacy dances on the tip of most people’s tongues, but Danglin is quick to reject the idea of his role being merely a replacement.

“There’s no replacing Robert Nesta Marley,” he said. “Our mission is to provide Wailers fans with an opportunity to get together. Nothing more”.

In fact, they have done this so successfully that there has been little need to change or adapt their music. This timeless quality is perhaps one of Reggae’s most defining features. As Danglin said, “The world needs to adjust to the music, no the other way round”.

It is clear why he thinks this. When we consider the deeper message that has coursed through the veins of The Wailers music since their creation it is as relevant today as it has ever been, and Danglin is keen to cultivate Marley’s wisdom for present day struggles.

The ideas of peace, love and unity rife throughout his words are just as important today as they were fifty years ago – and Danglin’s mission appears to be aligned with that. He knows that this message is what keeps the Wailers’ music alive and current.

“If you look in most college dorms in the US, Bob Marley’s picture is there. It’s because people are looking for more than what the media is selling them – they know it’s a temporary fix. But if you want clarity, you have to go to the source. For me as a Jamaican, that is Marcus Garvey. If you asked Bob Marley what inspired him, he would have said the same thing”.

Maybe what has changed more than the music itself is the audience, which has become far more diverse. Danglin admits, “You see younger and younger people. You see older and older people too. It’s just the fact that the music is timeless and it’s the people that are adjusting”.

Ultimately, Danglin’s responsibility has been less about replacing Bob Marley and more about transmuting the positivity found within his lyrics for the people of today.

“There are more good people in the world then evil people. The problem is all the evil people have all the money, and they control the media and make you feel like evil is all there is. But good will always prevail”.

With a band whose members have shifted regularly, and a success story so intimately connected to someone who passed away thirty-four years ago, it’s hard not to wonder what has held it all together for so long and what tensions have emerged. But Danglin quickly dismissed the notion of tension.

“What kind of tension can you bring on stage? If you see five-thousand people in front of you on stage and you still have tension, you don’t belong on stage”.

It clear Danglin views The Wailers as a musical pillar – a representation of timeless wisdom. When asked what is next for The Wailers, he turns the question on its head by asking, “What is next for the world?” – a better question, most would agree.

Throughout history, music has been one of the most powerful mediums for spreading a message, inspiring people or simply making them dance. The Wailers’ music achieves all three.

Putting his deeper intentions aside, Danglin admits that this is what it all boils down to. “I can’t go a week without music. Music is the greatest medium for reaching people. The only thing that matters is music at the end of the day. The people’s reaction to our music is what inspires us to move forward”.

Hearing Danglin’s words serve as a reminder to us all that music is one of the most powerful ways to preserve memories and inspire the future. May The Wailers’ legacy live on. 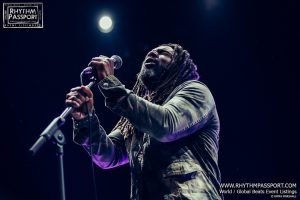