In times of social distancing, travel chaos and restrictions, it’s uplifting to meet up (even if only figuratively speaking) with people who made cultural and musical inclusivity and collectivism their credo.

Since the meaning of  the band’s name (‘serendipity’ in English), Nasip Kismet is a breath of fresh air in the present day’s tense atmosphere and its sound a glimmer of hope in a more and more polarised world.

The Budapest-based band, launched by Turkish musician Arif Erdem Ocak in 2020, not only brings together Turkish sonorities with Eastern European characters, but also different music eras and styles offering an all-encompassing music perspective that range from psychedelia to Anatolian folk and ethno-jazz to funk.

Little more than a couple of months ago, the band released a new single titled ‘Ankara’nın Bağları (Büklüm Büklüm)‘, a live LP, and its Euro tour is currently in full swing… So, no better timing to reach Arif, Daniel Mester (sax and clarinet player of the band) and Derya Ocak (vocals) to have an eight-hand interview about serendipity, Budapest and Nasip Kismet‘s music at large.

…and after having read the interview, bear with us and enjoy the playlist that Nasip Kismet band members have compiled for us featuring their influences and inspirations.

Can you briefly retrace Nasip Kısmet‘s story for us? And why did you decide to call yourself ‘serendipity’?

ARIF: Since I started my solo career in 2015, I have been performing mainly in Budapest with only Turkish music, including my own compositions and Turkish folk music. The reaction of the audience from all around the world was amazing to such music. Some of the songs are from the 13th century or 19th and most of them are anonymous; we don’t even know when and by whom they were made.

During that time I decided to have a band with the name of Nasip Kısmet to make only Turkish music. I picked this name because I just wanted the band to create itself, find its own path, luck or destiny. And in Turkey, “nasip kısmet” is a commonly used phrase that is idiomatic for native speakers and expresses the idea of fate or destiny. Similar to the Spanish phrase “Que sera sera”, it is used in Turkey to suggest that one has surrendered to the current of events beyond their control. Submerging themselves in the flowing river of time and circumstance, they accept what comes—be it good or bad—with arms open wide. Actually there is no exact translation of this expression in English. Some suggested “serendipity” as the closest meaning.

That time, there was no band yet, but the name, music and the sound I was dreaming to make were there. It came into life only when I heard that Cem Aksel (known as one of the best jazz drummers in Turkey) was coming to Budapest. We met and talked about making music together. And just the day after, I encountered Dániel Mester on the way, just by chance (destiny?), and I asked him if he would like to join us. He liked the idea and immediately accepted. Later we started to look for a bass player and Márton Eged joined us. This is how Nasip Kısmet started to form in 2019. I guess even the initial forming of the band was just a “nasip kısmet” or “serendipity”.

PS: The word “kısmet” is also used in English vocabulary.

I’ve read that all of Nasip Kısmet band members have come from quite remarkable music careers. So, I was wondering why you decided to restart everything from scratch and put yourself to the test with a brand-new project?

ARIF: Actually every member of Nasip Kısmet is still involved in their side projects. We all enjoy jamming together or re-arranging an old Turkish tune with each member’s creative input.

We all know that it is challenging to make Turkish music where people are used to listening to the music in their own language or English. But it is motivating for us to reach another level. When we start playing on the stage and see the reaction of the audience, everything is changing.

How does a band like Nasip Kısmet work? How do you write new music and shape, develop and define your songs?

DANIEL: Arif offers existing Turkish songs and we pick some of them and try to make our own version. Sometimes we jam and some instrumental songs come out of that which we later work on and develop.

ARIF: When we want to do a new song, we listen to all the different versions of that song and try to make it sound like Nasip Kısmet. And sometimes we have jam sessions and we take some elements from those sessions.

Even if they are more than 1000km distant, Turkey and Hungary share many similarities when it comes to their tradition and music. So, how was it to launch a project focussed on Turkish folk music in Budapest and how much does the Hungarian repertoire enrich Nasip Kısmet‘s sound?

DANIEL: Nasip Kısmet has a Turkish repertoire, for now we don’t have Hungarian folk music elements, or Hungarian songs, but that will change soon.

ARIF: Definitely we have some similar music roots. I feel this in some songs. Also Bela Bartók’s archive is very important for Turkish music. He came to Turkey, visited almost every village and collected folk songs.

We are a Turkish folk band, but with Hungarian musicians coming mostly from jazz backgrounds, we would love to experiment and discover more cross-regional music!

Despite the fact that you have released an EP not long ago, I know that you are already planning to publish your debut LP in a few months’ time. Can you briefly introduce it for us?

ARIF: We finished our LP recording in April 2021. We always like to record live and both EP and LP were recorded live, all together at the same time in the same room. We like that feeling. We use a different recording technique for this recording (DSD), because of that we have to play everything correctly. We played songs and selected those we liked the most. We completed the recording in one day.

DANIEL: It will be an awesome recording. Because of the special recording technique (DSD), we did not correct or fix as much as we do normally and it was a live session with everyone playing at the same time, so you can feel that atmosphere.

You are a good-and-proper international band, with members from different countries who play together and shine a light on traditions from different regions. I guess that it’s getting harder and harder to bring forward such a cross-border “message” in these times, not only because of Covid, but also because of how governments are dealing with their border and migration policies. Can you tell us a bit more about your personal and professional experience with these issues?

ARIF: Budapest is a very multinational city. I believe that the city’s mixed culture helped Nasip Kısmet to become successful in a short period of time just before the pandemic. Our audience is really very diverse and we love love love this! Everybody can find something in our music and the way they express their feelings with their dance, movements, or with words after the concert is really touching. When a person from Finland sings ‘Yalancı Dünya’, another from the USA dances with ‘Mihriban’, and one from Iraq expresses the similarity of the sound to his country’s music… This is where we expand and grow as  musicians, where we shine all together.

After the pandemic, sadly enough you could see how this amazing city became “empty” suddenly. Most of the people had to leave or those who were planning to come back could not come. This saddens us a lot. But slowly life is coming back to normal in Hungary. We are hoping that one day we will just remember those days as a past memory.

We mentioned Covid-19 in the previous question, so it’s straightforward to ask you to what extent the pandemic has affected your project in these mad months?

ARIF: I guess it was a shocking experience for every musician. But I believe we managed to use this time as effectively as possible! We rehearsed a lot and recorded an LP. But of course that doesn’t change the fact that we were all sad about the cancelled festivals and concerts.

DANIEL: All the concerts were cancelled. However, the pandemic gave us a lot of time to rehearse and prepare for our recording.

What can you tell us about the Budapest music scene? And what are the main differences with the Istanbul or Ankara ones?

ARIF: Actually now in Budapest I feel the way how I felt in Ankara in the late 90s. Many underground bands/musicians and collaborations. Then in the beginning of 00s many of them became popular and hit the charts, including my own band Seksendört. Everybody asked, why did that not happen in Istanbul but in Ankara? Istanbul is a bigger city with bigger opportunities for the musicians. I guess it is because the smaller community and having fewer opportunities made us more motivated and supportive to each other. I couldn’t find this atmosphere in Istanbul or Amsterdam, but now again here in Budapest! You can find different groups of successful musicians from different genres or countries. But they make music together, perform together, and support each other.

Budapest is the best place for a musician. Every night there are many live concerts or jam sessions etc. As a musician you could play every night.

Is there any Budapest or Hungarian-based musician/band you would like to suggest we listen to?

How would you introduce Nasip Kısmet to someone who had never listened to your music?

DANIEL: Party music, that includes Turkish songs. There are a lot of psychedelic moments, solos. Cooool!

ARIF: We  play Turkish folk music with an ethnic jazz background, and around that some psychedelic, funky or electro dance elements!

To enjoy and attend one of their upcoming gigs, check out the dates below:

…and it’s not over yet, you can also find out more about the band’s music influences and inspiration listening to the playlist they compiled for Rhythm Passport 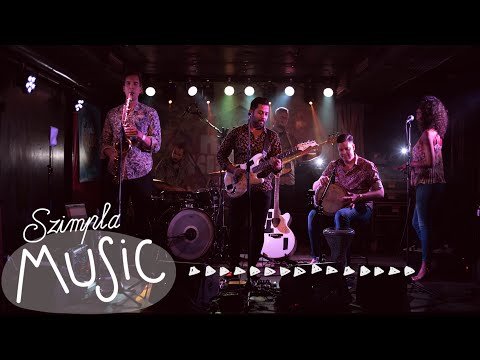 Nasip Kismet are a Budapest-based quartet formed in 2019   The band, led by Turkish-born Arif Erdem Ocak, focuses its sound on Turkish contemporary and traditional folk music, which the musicians blend with jazz, psychedelia and Balkan influences.   The sextet recently released their first EP, available here: https://ffm.to/nasip-kismet  …