We’ve had to wait two years, but we will make up for the lost time and fun with interest.

After an unexpected and unwanted hiatus, La Linea Festival and its Latin sounds feast is finally back on stage with an intense two-week programme presenting 10 shows around London.

From next Thursday (21st of April) till Monday the 2nd of May, the Como No! team has in store an exciting calendar of events featuring both up-and-coming and well-established acts championing, exhibiting and moving forward the Latin Music scene in London, as well as around the world.

The 20th edition of the festival will debut on Thursday at the Jazz Cafe showcasing the new Latin music blood and some of the most interesting artists part of the Candela Records roster, the very first record label focused on Latin urban sounds, which was founded in London. Expect new and London-oriented perspectives on reggaeton, Latin hip-hop, drill, nu-soul, R&B and salsa courtesy of Angelo Flow, Clara Hurtado, Guala, Rene Alvarez and The London Latin All Stars.

Two days later, at the scenic Union Chapel, it’s going to be about fado and its dreamy and nostalgic atmospheres. The duo formed by Lina and Raul Referee is indeed one of the most sought-after acts when it comes to interpreting and bringing forward the traditional Portuguese style.

On the following day, Sunday 24th, you are going to be spoilt for choice. In Camden, the Jazz Cafe will host the imaginative and extraordinary musicianship and Afro-Cuban rhythmic drive of Havana-born pianist Roberto Fonseca. While in Dalston, Cafe OTO will enjoy full immersion into the tradition of the Llanos, the vast plains on the border between Colombia and Venezuela where the Orinoco River flows. Accompanied by harpist Diego Laverde, Adolfredo Pulido on bass and percussionist Carlos Talez, Venezuela singer/songwriter and excellent cuatro player Luzmira Zerpa will introduce the audience to joropo and musica llanera through the folk repertoire of the region, folk tales and personal experiences.

On Tuesday the 26th of April, we will be back at the Jazz Cafe for one of the highlights of the festival. La Linea 2022 will have the honour to host no less than Ana Tijoux. French-born of Chilean origins, the singer/songwriter and MC is one of the most emphatic voices in the Latin music panorama, spreading her socially and politically conscious lyrics far and wide through hip-hop, R&B, folk and Latin-pop.

The Union Chapel and Portugal will be on the bill once again on the 28th, with the warm voice and original artistry of another exceptional fadista, Sara Correia. The Lisbon-based vocalist will delight La Linea with her very first London performance. While on the same day but in the late afternoon at the Ritzy Picturehouse in Brixton, it will be about the premiere of Mambo Man. A multi-award winning movie (with an outstanding soundtrack) shining a light on Cuba, its music and love/hate relationship with capitalism. The screening will feature a Q&A with the director Mo Fini and live performance by Cuban musicians David Alvarez and Rolando Luna.

The final (long) weekend and events of this year’s edition of La Linea will showcase mariachi music, cumbia, tropical grooves, Afro-Cuban sounds and vintage salsa. Starting from the evening of the 29th at Rich Mix with Las Adelitas, an all-female ensemble featuring an original and gender-stereotype challenging take on the Mexican mariachi tradition.

On Saturday (30th of April) it’s going to be about uplifting dance vibes at Well Seasoned in Peckham, where London-based cumbieros Malphino, refined Mexican DJ Coco Maria and the Movimientos crew will give life to ¡Cumbia, Mi Amor! bringing the warm sounds of tropics to South London.

Finally, on Monday the 2nd of May, the grand finale, in every meaning, when the 20-member strong all-star band New Regency Orchestra will take control of the EartH’s stage to showcase their vibrant and fulfilling sound inspired by the music coming from New York between the late 1950s and the 1970s, when Cuban, Latin and jazz notes were blending together giving life to something unique.

We have waited for a new La Linea for two years…and every day we waited was worth it! 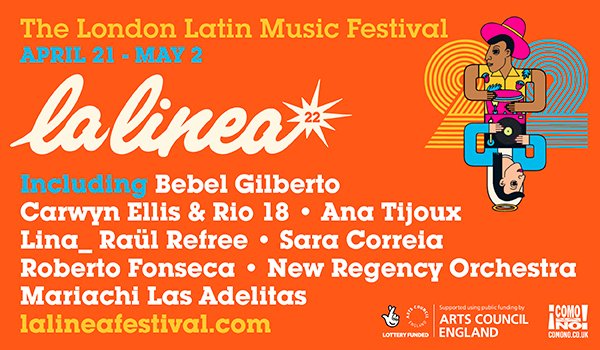 The countdown has officially started… in two months’ time, the 2022 edition of Womex will get underway to spread the sounds, words and images of the world-music world throughout Lisbon. After a thoroughly successful experience in Porto last year, the Worldwide Music Expo is indeed going to be back to…