Malian legend Bassekou Kouyate leads his band Ngoni Ba at Subterania to play his new album and to carry on his lifelong ambition to share and promote the West African instrument, the ngoni.

Subterania, a small venue in West London, welcomes one of the world’s best ngoni players. Bassekou Kouyate is one of the biggest names in African music, and his talent is for making contemporary music with the small stringed instrument from West Africa. Albums like Ba Power and I Speak Fula provide us with some of the most interesting and rocky Malian blues ever made on the Ngoni.

The tour, starting in January, will promote the release of Kouyate’s fifth album, Miri, an album that will home in even further on modern Malian culture and address some of the issues caused by climate change in West Africa. Kouyate’s aim throughout his career has been to celebrate and share the power of the Ngoni; this album plans to keep this up.

Kouyate’s band has three Ngoni players, all playing different sized instruments and creating a diverse pallet of sound, allowing the songs to quickly change tone and style without losing the core narrative within the music while playing as much ngoni as possible.

If previous albums are anything to go by, this will be an amazing chance to dance and enjoy some new music from one of the world’s masters of his instrument. 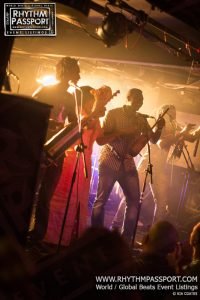