They couldn’t possibly find a better title to this event: East Meets West, and that’s how it will go on the 2nd of March at Rich Mix. When Nepalese fusion band Namlo will introduce their brand new self-titled album supported by so distant, so close singer/songwriters from Senegal (Kadialy Kouyate) and Orkney Islands (Merlyn Driver).

It’ll be a night dedicated to folk music and traditions which are worlds apart. From the Himalayan slopes, Kathmandu and South Asian repertoire with a Western twist, delivered by 7-piece band Namlo, and the West African griot sound of Kadialy Kouyate with the comforting sound of his kora, all the way to a Northern European and Scandinavian collection of tunes and tales presented by Merlyn Driver, you’ll enjoy a stimulating show that will expose you to heartfelt and organic cultural expressions as never before.

Hosted by DJ Ritu and presented by Celebrate Life, East Meets West will genuinely inspire you, both by the stories you’ll bear witness to, and the sounds you’ll experience. 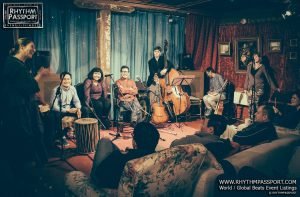