This Friday, Archspace London, located right under the overground railway of Haggerston, is welcoming Gilles Peterson’s signee Owiny Sigoma Sound System. The band, made up of Kenyan and British members, make a music which sums up their diverse background and influences, and is not only a blend of Africa and Europe but also presents elements from the traditions of the Americas and beyond.

Support comes from Italian producer Populous (whom we recently interviewed) who will present his latest album Azulejos with an audio-visual show. The album, written and composed in Portugal, is a homage to and a twist on cumbia – and his most successful work to date.

It is music that will make you dance so come prepared 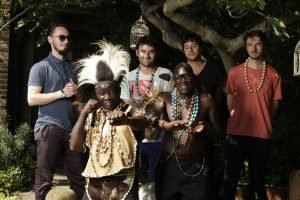