An Evening of World Music

A world music extravaganza bringing musicians together from Pakistan, Senegal, Spain and the UK.

QalandarArts is all about creating world music events that reflect London’s melting pot identity whilst also pushing some boundaries. This evening will commence with a percussion explosion. Shahbaz Hussain from Manchester is one of the worlds leading tabla players of his generation and needs little introduction. He will have a percussion head to head with Ayoze de Alejandro; from Gran Canaria (Spain) Ayoze is a drummer/percussionist who resides in London.

This will be followed by a coming together of two exciting musicians. Hasan Imam – a guitarist, composer and band leader of the eclectic global music ensemble Imam Collective. His music has been described as genre crossing and transcendental. Imam explores and threads music disciplines from around the world in a unique contemporary way, tethered to the social narrative of our times. Imam’s latest project ‘Solitude’ with Sarod player Manik Khan investigates the traditions of West African and Indian classical music.

Born and raised in Pakistan, Imam moved to Boston to study composition and production at The Berklee College of Music. Currently he lives in San Francisco, California where he performs and teaches, and is a student of Indian Classical Music with Alam Khan at the Ali Akbar College of Music.

Hasan will be joined by Kadialy Kouyate. Kadialy belongs to the great line of Kouyate griots descendent of Balla Fasseke Kouyate, the first Mandinka jali who became the official griot in the service of the emperor Sundiata Keita in the 13th century. Being brought up in such a family of griots, he played the kora instinctively from an early age. He was raised in a large family circle of different generations from whom he acquired a great knowledge of songs based on traditional stories, the bedrock of his repertoire.

Since his arrival in the UK, Kadialy has played a significant part in enriching the London musical scene with his griot legacy. Kadialy has been teaching the kora at SOAS, University of London, for the last decade and he has also been involved in countless musical projects both as a collaborator and a session musician. He has played at venues and festivals across the world, touring to Europe, Australia, North and South America. 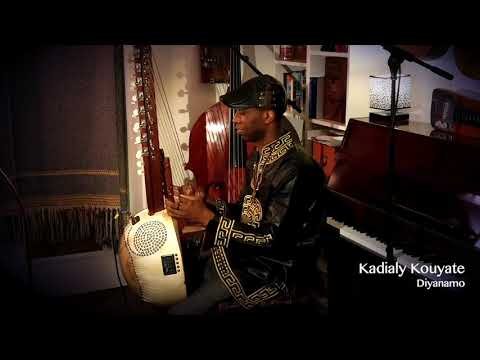