"one of the most rousing, reliable new African bands of the year" The Guardian

Krar Collective serve up a colourful feast of mind-blowing Ethiopian grooves. Led by Temesgen Zeleke, a former student of Ethiojazz legend Mulatu Astatke, Krar Collective perform a rootsy yet contemporary take on traditional music from Ethiopia based on other-worldly modes and driven by hypnotic rhythms. The traditional acoustic krar lyre is associated with the azmari minstrel tradition; electrified, in the hands of Zeleke it becomes a gritty, ancient rock guitar. Accompanied just by traditional kebero drums and fronted by stunning vocals, Krar Collective with a minimal line up create a surprisingly full band sound, leading them to be dubbed 'The Ethiopian White Stripes'
With songs that journey from gently, rippling acoustic numbers to truly rabble-rousing, this music that is at once African, and yet unique to Ethiopia will move your soul and rock your feet.

**** SIMO LAGNAWI and The GNAWA BLUES ALL STARS (Morocco)

Simo has been nominated for 2 SONGLINES awards for 2014; BEST NEWCOMER and BEST ARTIST.

Gnawa Master from Morocco
Simo Lagnawi is the U.K's leading Guembri player and Gnawa Master.
This Summer he performed on the BBC3 Late Junction Stage at Latitude Festival with his band Electric Jalaba. They also performed at Rhythm Tree Festival, 'Re Re Riga' festival Latvia, Bestival, and the Smugglers Festival in Kent.
His Solo Debut Album 'Gnawa London' was featured in Songlines magazine as one of their 'Top of the World Albums' in September.
Also, he was a winner of one of the World Music network battle of the bands competitions this Summer. 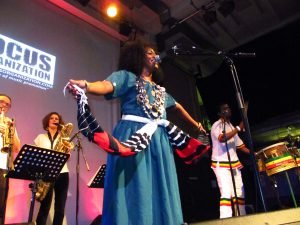