The septuagenarian highlife and Afrobeat musician is known as the 'James Brown of Ghana'. After collaborating with Fela Kuti in the early '60s, Taylor become a major figure in the Ghanaian music scene, producing a number of highlife artists in his homeland. He then took a 30-year break from the business, returning in 2010 with the album Love and Death, followed two years later by Appia Kwa Bridge. "Never one to merely relive the past, Ebo continues to pursue new musical adventures and his current young band are superb," says WOMAD.

Guitarist, composer, arranger, bandleader, and producer Ebo Taylor is a true great of Ghanaian music. Taylor was a major part of the explosion of Highlife in the 50′s and 60′s with bands the Stargazers and the Broadway Dance Band. He quickly came to the fore as a composer and frontman, and in 1962 he took his own group, the Black Star Highlife Band to London. There, he collaborated with Afrobeat pioneer Fela Kuti and many other African musicians in Britain at the time.

On his return to Ghana he worked as a producer, crafting recordings for Pat Thomas, C.K. Mann, and others. In the 70s and 80s, Taylor experimented with combining traditional Ghanaian material with Afro-beat, jazz, and funk rhythms to create his own unique sound. More recently, Taylor's work has been borrowed by the likes of Usher, and his music has seen a resurgence, leading to the release of a new album 'Love and Death, his first internationally distributed album. In 2012, Ebo released the deeply personal Appia Kwa Bridge, appeared, and showed that at nearly 80, Taylor is still as intensely creative as ever. 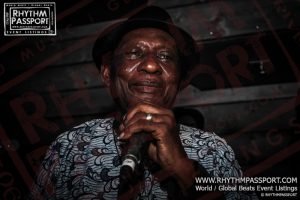