Taking you from the bohemian streets of Shoreditch to Kings Cross’ finest contemporary cultural institutions, the sixth edition of the London International Arts Festival (LIAF) is a pan-London celebration of the capital’s most exciting music and culture. Running for six nights across four different venues, LIAF is a must for anyone wanting to know what London truly sounds like right now.

�Curated by the Indian violinist Jyotsna Srikanth, LIAF celebrates the many colourful cultures of London’s historic East End in some of its landmark venues. 2017’s handpicked line-up spotlights the best up-and-coming world music bands alongside masters of the South Indian classical world.

LIAF is host by Dhruv Arts, a UK-based not-for-profit organisation that provides music education and workshops for all ages along with performances of South Asian, Carnatic and world art forms.
The first LIAF took place in 2012 and has since featured artists from across the globe; India, Mexico, Serbia, Turkey and North America to name a few. Alongside world-class concerts, LIAF offers hands-on masterclasses providing a crucial platform for cross-cultural and multi-generational artistic interaction.

Festival founder, curator and violin virtuoso Jyotsna Srikanth explains; ‘What started as a desire to showcase the very best of South Indian Carnatic music has expanded into a far richer tapestry of music and arts originating from different continents’

Trilok Gurtu, the virtuoso percussionist Trilok Gurtu is a legend on the jazz and world music stages. His unique genius which has played a major role in creating some of the finest works of his fellow master musicians, amongst others, John Mclaughlin, Joe Zawinul, Dave Holland and Jan Garbarek, Trilok Gurtu continues to define and redefine his position as one of the percussive art’s greatest innovators of all time. His approach to playing and composing is non-stylistic, built upon a solid and deep understanding of many global styles.

Raga Garage is a unique blend of Indian Carnatic and European classical sounds, layered and embellished with contemporary ornamentations, topped up with exotic and ethnic rhythms! Comprising of Jyotsna Srikanth (Carnatic classical violin), Robert Atchison (Western classical violin), Shadrach Solomon (piano) and Manjunath NS (drums and ethnic percussion), Raga Garage is simply a mixing pot of many Indian and European classical influences culminating in a sound both new and unique.

James Yorkston, John Thorne and Suhail Yusuf Khan are Yorkston/Thorne/Khan.
This unique trio represents a confluence of currents, among them the north Indian sarangi; jazz-tinged bass, reminiscent in places of Danny Thompson; acoustic guitar that owes a debt to Elizabeth Cotton, Dick Gaughan and Mississippi John Hurt; and three very different vocalists. Together, they walk on untrodden ground.

Kefaya Trio was formed and led by London-based musicians & producers Giuliano Modarelli and Al MacSween, Kefaya are an eclectic group of immigrants, travellers and international artists seeking to find common ground between folk traditions of the world, with a cutting-edge sound rooted firmly in the 21st century.

Born in the East End of London, virtuoso vocalist, actor and composer, Cleveland was entered for the Wire/Guardian Jazz Awards and was voted best vocalist for three consecutive years. VocalSuite is an a-cappella vocal improvisation performance that uses the atmosphere of venue to present a performance of the moment; seamless links between musical cultures from Africa to Europe go together to create human vocal soundscapes.

Myriad is original compositions in a stylistic pluralism, juggling in a multi-layered matrix of world music, neoclassical and jazz, performed on a thrilling setup with piano and a unique setup of drums and percussion instruments. 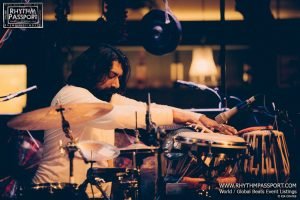