The Nest Collective take root on the Queen Elizabeth Hall Roof Garden for a series of summertime gigs during Festival of Love. Providing a summer soundtrack to the London skyline - Folk with Altitude returns for a 4th year under the banner ‘New Folk, Old Folk & No Folk' - Bring brollies, pillows and an eager ear!

As part of Africa Utopia at The Southbank Centre: Hear a genuine desert rock band, sculpted by the searing air and shifting sands of the Sahara.

Terakaft’s name means ‘caravan’ in Tamasheq, and its musicians’ wild electric-guitar riffs and pulsing Touareg percussion appear to follow the rise and fall of endless Saharan dunes. The band’s music evokes the desert in all its cruelty and beauty, drawing on both Touareg tradition and the popular music of today’s Tamasheq youth.

Established in 2001, Terakaft have since released several albums and toured around the world, building a reputation as a mesmerising live act.

Please note: Your ticket gives you exclusive access to the garden for the event. Please note that there is limited seating, other than the grass, and some views of the musicians may be obscured. There is a wet weather contingency for this show. 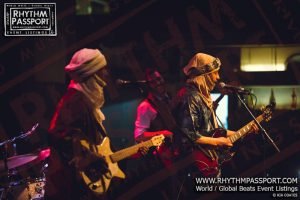